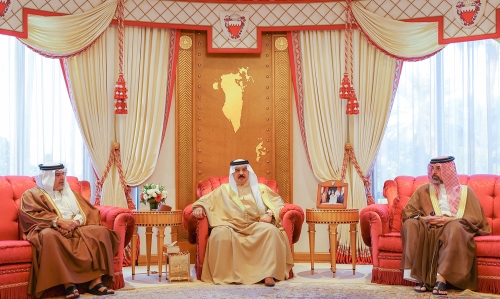 His Majesty King Hamad bin Isa Al Khalifa praised Bahrainis’ active participation and high voter turnout in the parliamentary and municipal elections which reflects their sincere loyalty to the nation.

His Majesty expressed thanks and gratitude to HRH Prince Salman, hailing his dedicated efforts to serve Bahrain, support the Government Action development initiatives, and follow up on mega projects.

His Majesty hailed Bahraini women’s participation in the polls as voters and candidates, hailing the election of eight women MPs, and three female municipal councilors, which reflects their pivotal role in development and democratic process.

HM King Hamad praised the outcome and successful hosting of the Manama Dialogue, reiterating the commitment of Bahrain, the beacon of peace, to the principles of peace, neighbourliness and coexistence.

His Majesty affirmed Bahrain’s unwavering support to all efforts aimed to consolidate regional and global security, stability and peace, which are the pillars to achieve development, progress and prosperity.