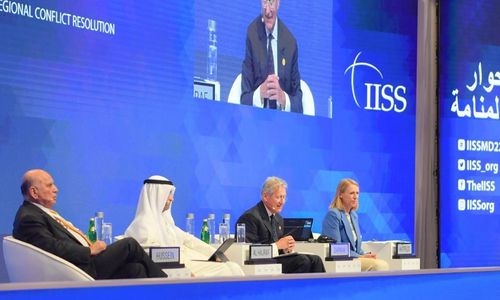 Speakers at one of the sessions of Manama Dialogue unanimously agreed on the importance of the region's initiatives and contributions to strengthening regional and global peace and security.

He pointed to the strategic importance of the Middle East region and its advantages, which require serious steps to be taken to stop conflicts, noting the importance of the Manama Dialogue to discuss challenges from their various political and security aspects, and to search for opportunities to end instability and maintain security and community peace.

Dr Fouad Hassan touched on the role played by Iraq in confronting the terrorist organisations represented by the terrorist organization "ISIS", and is still playing the same role in cooperation with the countries of the region and the world with the aim of enhancing security and stability, preventing the entry of foreign fighters and drying up financial support for them, calling on the Security Council to urge countries to fully implement its obligations related to combating terrorism and cutting off all forms of financial support for it.

He explained Iraq's pursuit of legal, judicial and security cooperation with the Arab Gulf states, to enhance cooperation in the areas of security and economic diplomacy, as Iraqi diplomacy seeks to build balanced relations with all countries of the world and international and regional organizations to preserve the achievements that have been made.

Dr Nayef Al Hajraf explained that the Middle East has been a region full of great initiatives and conflicts since ancient times, and one of the most important of these initiatives is the establishment of the Cooperation Council for the Arab States of the Gulf, which aimed to create a framework for cooperation to enhance relations, development and prosperity, and over the years In the past, the Council showed a very important ability to face challenges and risks, and to play the role of a factor of stability in the region and the world.

He reviewed the largescale programmes and plans launched by the Gulf states to support human capital, infrastructure and the journey of transformation, in addition to informing the Council of its commitments in combating terrorism and poverty in countries in need, which made the Council the best example of effective initiatives in the region.

The Secretary-General of the Gulf Cooperation Council reaffirmed faith in peace and security, which requires the application of the rule of international law and the Charter of the United Nations, respect for the sovereignty and political independence of states and their territorial integrity, resolving disputes by peaceful means and non-interference in the affairs of others.

Meanwhile, Anken Huitveldt, stressed that peace and reconciliation is one of the pillars in which her country believes, as peace is in the interest of the whole world, noting her country's efforts to facilitate talks and long-term investment to create a coexistent world.

The Norwegian minister indicated her country's involvement in facilitating negotiations around the world and supporting cooperation initiatives, which contributed to achieving positive results such as reducing the suffering of those affected, a temporary ceasefire, or the establishment of safe corridors.

Trump back on Twitter after Musk conducts user poll