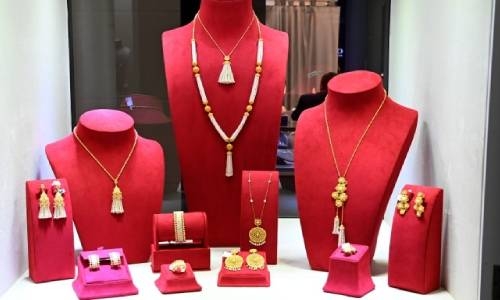 With a record number of footfall in the first four days of the Jewellery Arabia, the show has emerged as an instant hit according to exhibitors in this year’s show.

The leadership’s support has led to the tremendous success of the 29th edition of Jewellery Arabia held on November 16 – 20, and which has received overwhelming response from the visitors from Bahrain and the neighbouring countries.

Al Hawaj said he was extremely happy with the return of major events like Jewellery Arabia.

“I am so glad that this event is taking place this year after a break last year due to the pandemic that hit the entire world,” he said.

“I am amazed at the tremendous response of people from Bahrain and our neighboring countries. We see this show is being attended by thousands of people which is an indication of the success of this major annual event that is on the calendar of the Kingdom of Bahrain. I can say that Bahrain is blessed by the grace of Almighty God with businesses coming back to normal.

He added that participation in this year’s show from the local businesses and most of the international brands was tremendous just like every year.

Abbas Shirazi, Director of the Bahrain Jewellery Centre thanked HRH the Crown Prince and Prime Minister for his care and encouragement to businesses in Bahrain.

“As a Bahrain Jewellery Centre, it was among the main partners behind the idea of the creation of Jewellery Arabia in 1991,” he said.

“BJC is a family running business and now we are the fourth and fifth generation serving the people of Bahrain following the footsteps of our fathers and forefathers.

“We are glad to see great response from the customers not only from Bahrain but also from the GCC. The footfall at the exhibition this year had been tremendous, and we are grateful to all government organizations that have come forward to make this event a huge success. We thank Deputy Prime Minister His Highness Shaikh Ali bin Khalifa Al Khalifa for inaugurating this event. Bahrain has been a home to such exhibitions and we look forward to more major events in the future.”

“We are extremely happy with Jewellery Arabia 2021 once again taking place in Bahrain, thanks to the leadership and the government of Bahrain for opening to businesses again,” said Tarik Chikhi, Area Sales Manager of Chopard for GCC and Middle East Region.

“The event since its opening has received many visitors every day. We are delighted to welcome our customers from Bahrain and the GCC after one year’s hiatus. We can say overall during these days the exhibition has been very successful, our business was good too and we look forward to participating in the next edition.”

Mohammed A.R Shirazi, Director at BJC, said they were excited to be back at Jewellery Arabia 2021 as one of the events that people in Bahrain and beyond look forward to attending.

“These five-days of the event have been a festive time,” he said. “We are happy to see overwhelming response from the people from Bahrain and the neighbouring countries. We would like to extend our thanks and appreciation to the leadership and the government of Bahrain for their support to this event.”