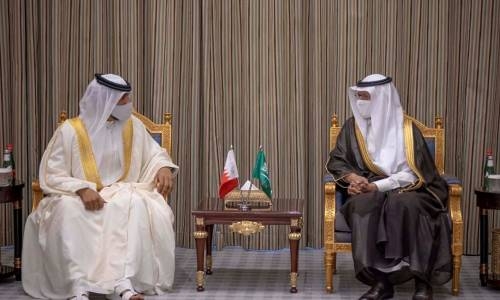 The Kingdom of Bahrain is continuing to strengthen its partnership with the Kingdom of Saudi Arabia in the field of energy, thanks to their interconnected and historical relations.

His Highness Shaikh Nasser bin Hamad Al Khalifa, representative of His Majesty the King for Humanitarian Works and Youth Affairs, Chairman of the Board of Directors of the Oil and Gas Holding Company, made the remark as he arrived yesterday in Riyadh, where he was received by His Royal Highness Prince Abdulaziz bin Salman Al Saud, Minister of Energy of Saudi Arabia.

HH Shaikh Nasser said that this sector has witnessed a qualitative leap thanks to the vision of His Majesty King Hamad bin Isa Al Khalifa and the constant support of His Royal Highness Prince Salman bin Hamad Al Khalifa, the Crown Prince and Prime Minister.

During the meeting, HH Shaikh Nasser discussed with HH Prince Abdulaziz bin Salman, in the presence of Aramco Chief Executive Officer Amin Al Nasser, ways to enhance cooperation and partnership in the energy field between the two countries.

Issues of mutual interest in the energy fields were also discussed in the presence of Dr Mohammed bin Mubarak bin Dina, Managing Director of the Oil and Gas Holding Company, and Abdullah Jihad Al Zein, member of its Board of Directors.