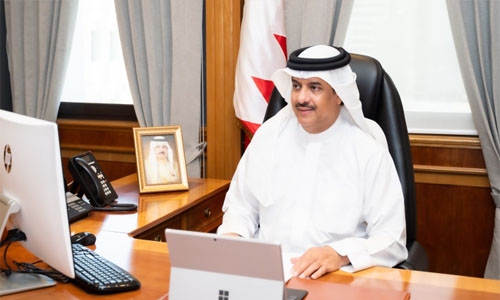 Bahrain is committed to boosting cooperation with the Organisation for the Prohibition of Chemical Weapons (OPCW) in tackling the proliferation of weapons of mass destruction.

During the meeting, Al Doseri praised the efforts exerted by Arias in promoting international cooperation and the organisation’s prominent role in providing all means of support to all countries to achieve security and stability.

Al Doseri is also chairman of the National Committee on the Prohibition of the Development, Production, Stockpiling and Use of Chemical Weapon and on their Destruction. He noted that the world today is going through challenges and exceptional circumstances due to the coronavirus (COVID-19) pandemic but the Kingdom is working harder to fulfill its obligations.

Al Doseri pointed out the committee’s keenness to continue its work by holding virtual meetings, organising training programmes in cooperation with the organisation and working to implement the obligations contained in the agreement.

He also reviewed the efforts made by Bahrain since the signing of the agreement, noting that the national committee was established in Bahrain based on Law No. (51) of 2009, which was issued in implementation of the agreement ratified by the Kingdom in 1997.

He pointed out the amendment of legislation to keep pace with the requirements of the agreement, stressing that Bahrain’s policy is consistent in supporting efforts aimed at eliminating weapons of mass destruction and their means of delivery and preventing their spread.

The OPCW Director-General expressed his pride and appreciation for the constructive relations of cooperation with Bahrain, and on the implementation of international agreements to achieve desired goals.

He lauded the efforts of Bahrain in implementing the agreement at the national level through the enactment of legislation and training of its national cadres in all fields and sectors. Arias hailed the commitment of the Assistant Foreign Minister to follow up on the work of the National Committee.

He also expressed thanks and appreciation to Bahrain for the continuous support since the organisation’s inception. Arias praised Bahrain’s positive attitudes towards international and regional issues to ensure a world free of chemical weapons and weapons of mass destruction, wishing the kingdom further progress and prosperity.