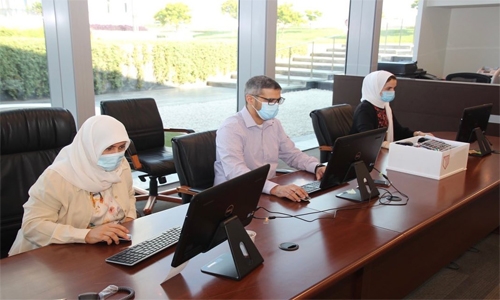 Development of Sheikh Jaber Al-Ahmad Al-Sabah Street intersection, maintenance of Sitra Walkway, and Works of Danaat Al Hoora are some of the projects being awarded by the Tender board this week.

Altogether, the board opened 99 bids for ten tenders placed by eight administrative bodies in the Kingdom.

Representatives of the administering parties and the companies participating in the tenders were present.

The tender board said it would award the projects to the best bids, based on conditions and lowest price.

The first tender opened was for developing the intersection of Sheikh Jaber Al-Ahmad Al-Sabah Street with Street 1 - Sitra. The tender launched by the Ministry of Works, Municipalities Affairs and Urban Planning attracted 18 bids.

The project aims to reduce traffic connection and delays during peak hours by upgrading the current intersection.

The committee also opened two other tenders by the Ministry of Works.

The first was for engineering consultancy services for road design works, for which received 15 bids.

The second was for the comprehensive maintenance work for Askar Primary and Middle School for Boys and Ahmed Al-Fateh Primary and Preparatory School.

A tender by the Ministry of Justice, Islamic Affairs and Endowments said it is looking to hire specialists at its IT Directorate.

Electricity and Water Authority was looking to lease a tower crane with a height of 18 meters. Three bids received for this tender.

A tender by the Bahrain Authority for Culture and Antiquities for renting cars received five bids. In the oil and gas sector, the committee opened a tender by Tatweer Petroleum for procuring a rapid intervention vehicle.

The committee also opened a tender by the Eskan Bank for engineering supervision work at the Danaat Al Hoora project.