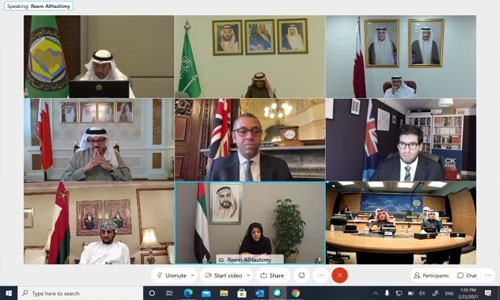 Foreign Affairs Minister Dr Abdullatif Al Zayani has stressed the deep-rooted relations between the Gulf Cooperation Council (GCC) and the UK and its importance.

This came as the Joint Ministerial Meeting of the Ministers of Foreign Affairs and representatives of the GCC states and the UK was held virtually yesterday.

The GCC side was chaired by Minister Al Zayani, who is also chairman of the current session of the Ministerial Council.

The British side was under the chairmanship of the Minister of State for the Middle East and North Africa at the Foreign, Commonwealth and Development Office of the UK, James Cleverly, with the participation of the GCC Secretary-General of the Cooperation Council, Dr Nayef Falah Al Hajraf.

In his opening speech, Dr Al Zayani affirmed the mutual keenness of both sides to further strengthen cooperation in supporting strategic partnership and joint action for the benefit of the people and in the face of common challenges.

He underscored that this meeting is an opportunity to review the current cooperation level and ways to enhance it for the common interests of both sides.

Minister Al Zayani also praised the constructive and effective role of the UK at the regional and international level, stressing the importance of working together to face challenges in the region and the world.

Minister Cleverly affirmed the importance of enhancing joint action between the two sides at all levels, hailing the outcomes of the summit held in the Kingdom of Bahrain in December 2016 between the UK and the GCC.

The Ministers also discussed British-GCC relations and areas of cooperation in various political, economic, and cultural levels for the common interests of both sides and peace and security in the region and the world.

They also stressed their keenness on enhancing strategic partnership following the GCCUK summit held in Bahrain in December 2016. They also reviewed the Joint Review of Trade and Investment between the two sides, which aims to enhance cooperation in this important field, in preparation for entering into free trade negotiations between the two sides.

During the meeting, they also exchanged views on political and security developments in the region and the international efforts to combat terrorism, in addition to several relevant regional and international issues.