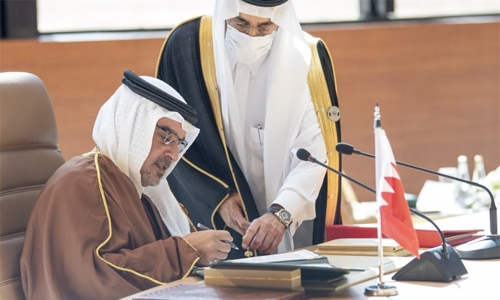 HRH the Crown Prince and Prime Minister sent a cable of gratitude and appreciation to King Salman. In the cable, HRH thanked King Salman for the warm and generous reception and hospitality during the summit, which reflects the depth of historic relations between Bahrain and Saudi Arabia.

HRH the Crown Prince and Prime Minister expressed the Kingdom’s pride in receiving the presidency of the next session of the Supreme Council of the GCC, noting the continuation of realising the aspirations of GCC citizens for a prosperous present and future.

He looked forward to the outcomes of the Al-Ula Summit, and its role in re-establishing GCC cohesion, while prioritising the security, stability and prosperity of GCC countries and their citizens.

In this regard, HRH the Crown Prince and Prime Minister highlighted the importance of strengthening GCC dialogue, a commitment to unity and a new phase in brotherly relations progressing the GCC journey.

The summit’s final communique and the Al-Ula declaration were then signed. Their Highnesses, the leaders of the GCC countries’ delegations, were also in attendance at the summit, chaired by His Royal Highness Prince Mohammed bin Salman bin Abdulaziz Al Saud, Crown Prince, Deputy Prime Minister and Minister of Defense of Saudi Arabia, on behalf of the Custodian of the Two Holy Mosques, King Salman bin Abdulaziz Al Saud.