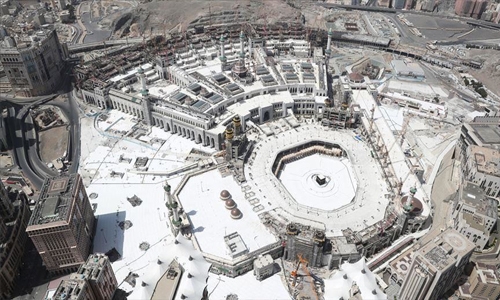 A fire in a fuel tank in Saudi Arabia’s port city of Jeddah was the result of a "terrorist attack with a projectile," an official confirmed Monday.

"On Monday at 3.50 am [local time], a blast caused the fire in the fuel tank at a distribution station for petroleum products in the north of Jeddah city," the official Saudi Press Agency (SPA) quoted an official with the Energy Ministry as saying, without giving his name.

He added that firefighting teams managed to extinguish the fire and did not report any casualties from the blast.

The official also confirmed that the blast did not affect the supplying of fuel from the station to its customers.

Statement by the Official Spokesman of the Coalition to Restore Legitimacy in Yemen Brigadier-General Turki Al-Malki says, “In reference to the statement issued by the Ministry of Energy regarding the fire that erupted in an oil tank in the oil derivatives distribution station in Jeddah, the terrorist, Iran-backed Houthi militia has been positively identified as the culprits of this cowardly terrorist assault, which did not target the Kingdom’s National Assets, but the core of global economy and its supply routes, as well as the security of global energy,” the Coalition spokesperson said in a statement.

“This terrorist assault is a continuation of the terrorist actions that targeted oil facilities in (Abqaiq) and (Khurais), which was adopted by the Houthi militia, while substantiated evidence proved the direct involvement of the Iranian regime in those terrorist assaults using Iranian-made Advanced Conventional Weapons (i.e. Cruise missiles and bomb-laden UAVs).

“Targeting civilians and civilian objects, including economic installations, in a deliberate, systematic manner is contrary to the Customary International Humanitarian Law and amounts to War Crimes.

“The Joint Forces Command of the Coalition undertakes all necessary operational procedures to safeguard civilians and civilian objects. All terrorist elements who participated in plotting and executing these hostile, terrorist operations against civilians and civilian objects will be held accountable in accordance with the Customary International Humanitarian Law,” the statement said.

The spokesperson emphasized that Saudi Arabia condemns this cowardly attack, and reaffirms that such acts of terrorism and sabotage, committed against vital installations - including the recent incident, in Jizan, near the floating offloading platform of the petroleum products distribution terminal, and the previous terrorist attack on oil installations, in Abqaiq and Khurais - are aimed at the security and stability of energy supplies to the world, as well as the global economy.

"These terrorist and disruptive activities that are committed against vital facilities [...] aim to target the security and stability of the energy supply route to the world and the world economy," the Saudi official added.

The Houthi rebel group regularly announces rocket and drone attacks on Saudi territories, saying they are in response to the Saudi-led coalition’s in Yemen.

Yemen has been beset by violence and chaos since 2014, when Houthi rebels overran much of the country, including the capital Sana’a.

Bahrain has strongly denounced and condemned the terrorist attack with the Foreign Affairs Ministry stressing that this cowardly terrorist act targeting oil installations threatens the stability of energy supplies to the world and poses a grave danger to the global economy.

In a statement, the ministry affirmed Bahrain’s solidarity with Saudi Arabia and its full support for all the measures it takes to safeguard its security and stability.

The ministry also stressed the need for the international community to take serious and strict steps to confront such terrorist acts of sabotage committed by the Houthi group that target civilian facilities and threaten the safety and security of innocent civilians.