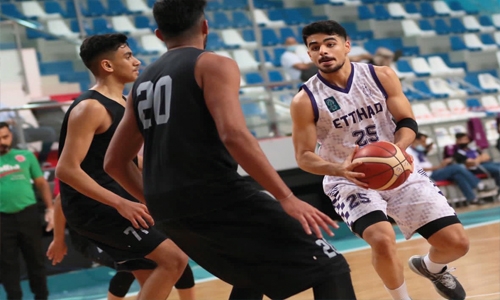 Al Ettihad and Manama were both victorious yesterday on opening night of the 2020/2021 Bahrain Basketball Association (BBA) Cup, being played at Zain Basketball Arena in Um Al Hassam. Ettihad outplayed an understrength squad of reigning league champions Al Ahli 107- 86, while Manama edged past Samaheej 81-75 in the evening’s other fixture.

Both games were part of the competition’s preliminary round, which features two groups comprising six teams apiece. Ettihad, Ahli, Muharraq, Bahrain Club, Nuwaidrat and Isa Town are all in Group A, while Manama, Samaheej, Riffa, Al Hala, Al Najma, and Sitra are in Group B. Ettihad finished the game strong against Ahli, outscoring their rivals by 20 points in the second half to pull away for the win.

They took a 21-18 lead at the end of the first period, and held on at the half to a slim 44-43 advantage. They managed to ex- tend the cushion to a commanding 78-65 after three, and then blew things wide open in the last canto with a 35-22 quarter to seal their 21-point triumph.

In Manama’s win, they faced a 36-38 deficit at the interval, but came alive in the third period to go ahead 62-58 with one quarter to play. They then did enough in the final frame to seal the win.

The preliminary round is being played in a single round-robin format within each group, with the top two teams qualifying for the semi-finals.