Message of solidarity | THE DAILY TRIBUNE | KINGDOM OF BAHRAIN 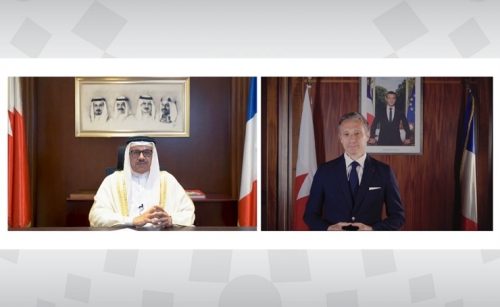 Ambassador Cauchard was speaking in a video message to the Kingdom’s French community and Bahraini friends on the occasion of France’s National Day, also known as “Bastille Day”. He said that the telephone conversation on July 9 between His Majesty the King and President Macron is a shining illustration of the high quality of relations between the two nations.

Ambassador Cauchard, who celebrates his first Bastille Day in Bahrain after taking office in October of last year, also highlighted the common determination to bolster cooperation in business, education, culture, sport, and other fields.

The French diplomat stressed the significance of solidarity during the coronavirus (COVID-19) crisis and paid tribute to all those affected by the pandemic, and especially to those who have been committed, courageously, in the fight against the virus, especially in providing care for the sick.

Annual festivities marking the occasion could not be held physically this year due to COVID-19; nevertheless, this special day for all French citizens was still being celebrated, Ambassador Cauchard said. “The celebration of the French National Day, every year, gathers all of us around the French Republic, the three colors of its flag, national anthem, values, history, army, European commitment, and attention to multilateralism,” he expressed.

“This year, the celebration is different—we all understand why—due to the current sanitary crisis which has affected the world, in Bahrain just like anywhere else, and imposed to not act as usual. “This year, our thoughts are with the victims of the COVID-19 pandemic, in France just like in Bahrain, to their families and loved ones.

Our thoughts are also with those, in France and in Bahrain, who fight every day the disease next to the patients to help them recover, and who accompany and remind them that human nature knows how to be generous and solidary. “I also think of all of us who had to adapt our way of life, both personal and professional, to the constraints linked to the fight against the virus.

And now again, on this vacation period, we have to deal with the various regulations limiting international travel. “But all that does not prevent, I know, our hearts from beating a little stronger today, like every July 14. I said when I arrived last October that we should be proud to wear the colours of France. “I say it even more strongly today; I say it even louder today.”

The virtual celebration was especially honored by a friendly message sent by Bahrain’s Foreign Affairs Minister Dr Abdullatif bin Rashid Al Zayani. “We in the Kingdom of Bahrain are proud of the quality of cooperation and partnership with this friendly country, which embodies ancient civilisation, sophisticated culture and modern development,” the Foreign Minister said.

“We greatly appreciate the active and constructive role played by the French government and the positive contribution it has made to the preservation of regional and international security and stability, and we are always striving to strengthen bilateral cooperation with the French Republic, serving the common interests of both countries and friendly peoples.”

On the occasion of the national day celebration by the French Embassy in Bahrain, the Foreign Minister paid tribute to the efforts of Ambassador Cauchard and the members of the Embassy to strengthen and develop cooperation and communication.

“I commend the French community and the tangible efforts it has made to strengthen the longest relationship between the two friendly countries, and I wish the French people further progress and prosperity,” the Foreign Minister said.