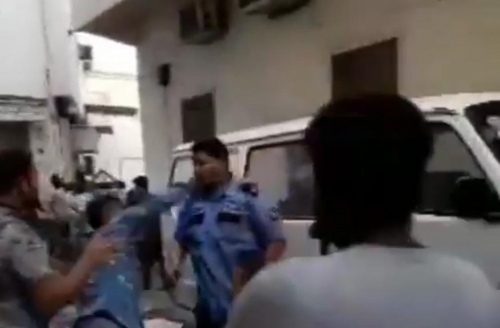 Police said late on Saturday that they have arrested three Asian men who were part of a group that physically assaulted two Bahraini security guards on the same day. This is related to footage widely circulated on social media platforms showing the group of Bangladeshis beating the men in uniform and chasing them down alleys.

The Interior Ministry confirmed a few hours after the video emerged that three of the men involved were arrested and a manhunt has been launched to nab the rest. The Ministry tweeted: “Concerning a circulated video on social media of a physical assault between a group of persons and two private security guards, the Capital Police and CID arrested three individuals and search continues for the arrest of the remaining suspects.”

The video sparked public outrage among citizens and netizens, as it showed the group of around 20 Bangladeshi men beating and chasing the Bahraini guards in a “barbaric and vicious manner”. Both guards were seen in the beginning of the video while, in what seems to be an argument with the group, at an entrance of a building. The argument quickly turned physical, with both guards being shoved around and yelled at.

One of the guards dispersed part of the crowd after he waved a knife at them and threatened them. Seconds after he put the knife back in his pocket, several men suddenly approached him and beat him using wooden boxes. More men began hitting both guards and were seen chasing them down the alley, which is reportedly in central Manama.

However, this information could not be verified. Enraged Response! Several MPs and social activists quickly responded to the incident, demanding rapid and tough action against the offenders. MP Ali Ishaqi described the incident as “shameful and humiliating”, while attributing it to the Labour Market Regulatory Authority (LMRA) as “the primary responsible party”.

Meanwhile, MP Ibrahim Al Nefaei commented on the matter in a tweet saying: “The repetition of the disgraceful violations of Asian labourers, such as insulting the national currency and physical assault on Bahraini citizens, reflect moral turmoil and chaos, and an undervaluation of the country and its laws.

The necessary controls must be endorsed to prevent the recurrence of such incidents and hold perpetrators accountable.” Also on Twitter, MP Khaled Saleh Buenq said: “Citizens are not insulted during the prosperous era of HM the King, and the government, under the leadership of HRH the Prime Minister and HRH the Crown Prince, does not accept that the citizens are assaulted.

“We confirm, as MPs, our total rejection of what a number of expatriates have done to attack the people of the country, and the relevant authorities need to take all measures regarding this.” As for social activist Ali Al Sakran, he posted a one-minute video online to comment on the matter. Al Sakran said: “This is a result of the leniency towards this community in Bahrain.

This is not the first incident in Bahrain and tens of Bahrainis were killed by the same nationality in the past, either by a grinder, a hammer or a machete.” No comments were available from the LMRA or the Embassy of Bangladesh.