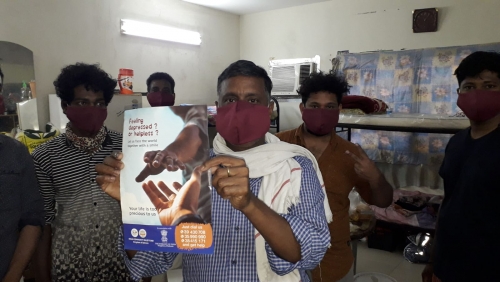 The Indian Community Relief Fund (ICRF), working under the patronage of the Indian Embassy in Bahrain, had reached out to distressed members in the community in many different ways ever since it launched its special initiatives during the coronavirus (COVID-19) pandemic.

The initiatives include the distribution of antiseptic soaps, awareness flyers and ICRF food support kits; the publishing of videos on how to protect one’s self from COVID-19; the distribution and education on the use of masks in public places; and the support for those feeling mentally stressed.

ICRF has taken steps to emphasise educating the community to ensure that they remain protected against infection. Special teams were delegated, with members selected from various states of India, to address this need.

Nearly 10,000 flyers as well as posters with disease-exposure prevention instructions were produced with the support of the Embassy, in different Indian languages and distributed across Bahrain including at various labour camps.

Videos in different languages on steps to prevent the spread of virus were promoted through various social media platforms. With the help of the Embassy, more than 10,000 reusable face masks were handed out at various locations in Bahrain, with another 10,000 to be distributed in the coming weeks.

ICRF members also support the community police in making public announcements in various languages on the importance of the government’s health and safety guidelines. Following a rise in cases of emotional distress and depression in past weeks, ICRF LIFE (Listen, Involve, Foster, Engage) mental well-being posters with numbers to reach specialist teams in times of anxiety have appeared in local print media as well as in social media.

A team led by Dr. Babu Ramachandran handles calls from people on distress, depression or anxiety and he provides advice on mental well-being. ICRF has met with Ministry of Labour and Social Development Labour Affairs assistant undersecretary Ahmed Al Hayki and highlighted concerns of expats staying in a COVID-19 facility.

Among the points highlighted were complaints received from occupants at the Sitra facility including the issue of poor hygiene among occupants, especially in the toilets. The Ministry has promised to look into these matters soon.

ICRF Chairman Aruldas Thomas appreciates well-wishers, including business entities such as Al Tawfeek Group, Megamart, Kavalani, Damani, Zubi and Partners, and other organisations including Bahrain-India Society, BCICAI, as well as kind-hearted individuals who have come forward to extend their support financially and in-kind to ICRF.

In spite of the ongoing pandemic situation, ICRF has managed to clear all pending payments to beneficiaries of the Family Welfare Fund support scheme. During the last six months, ICRF has paid INR100,000 each to 15 families. An additional 10 family welfare fund disbursements are on the way.

As per the scheme, the Family Welfare Fund provides financial assistance to the dependents of a deceased Indian residing in Bahrain, who earns less than BD100 per month. This scheme has been a great support and help to many unfortunate families who lost their bread-winner.