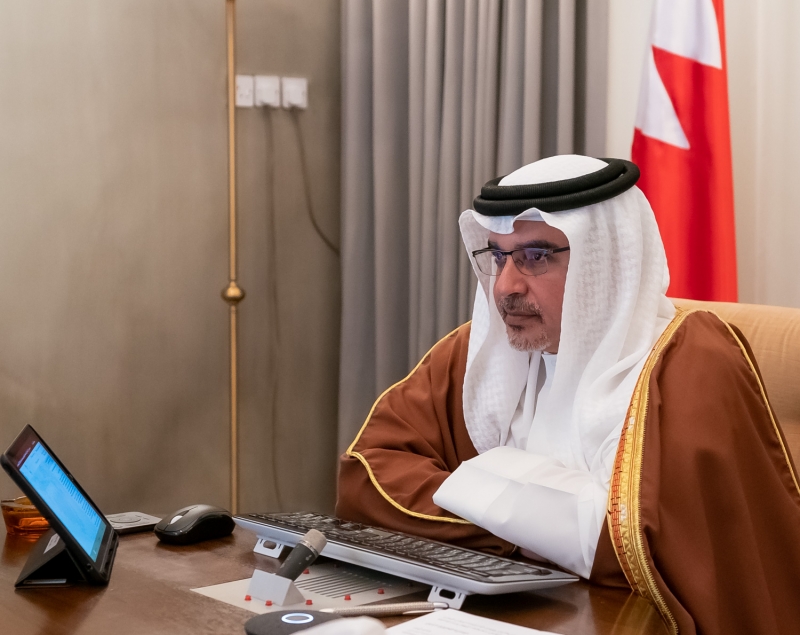 Bahrain has been listed as the 63rd freest economy in the world out of 180 countries, according to the results of the Index of Economic Freedom 2020.

This was reported as part of a memorandum submitted by the Ministry of Finance and National Economy, and reviewed yesterday during the weekly Cabinet meeting, held remotely for the first time and chaired by His Royal Highness Prince Salman bin Hamad Al Khalifa, Crown Prince, Deputy Supreme Commander and First Deputy Prime Minister.

GDP recorded 2.4 per cent growth at current prices, with the oil sector decreasing by 3.9 per cent, while the non-oil sector achieved a growth of 3.6 per cent compared to last year.

The report further indicated that the hotel and restaurants sector recorded the highest nonoil sector growth compared to that of last year, with a growth rate of 6.8 per cent. This was followed by social and personal services at 2.9 per cent and the construction sector at 2.6 per cent.

Meanwhile, the Cabinet commended HM the King’s directives aimed at aiding families affected by the coronavirus (COVID-19). It noted that this noble gesture reflects HM the King’s continued commitment to supporting families in need across the Kingdom.

In celebration of the International Day of Conscience observed by the United Nations annually on April 5, the Cabinet commended this initiative proposed by HRH the Prime Minister.

It emphasised the Kingdom’s commitment to fostering a culture of peace and conscience by providing quality education and implementing public awareness activities that promote sustainable development.

The Cabinet underscored that the health of citizens within the Kingdom and abroad remains a key priority. It also commended the tireless efforts of the Kingdom’s medical workforce, who have provided exceptional care, resulting in strong recovery rates.

Furthermore, the Cabinet reviewed efforts made by the Minister of Industry, Commerce and Tourism and the Ministry of Health to ensure sufficient food and medicine supplies, and strongly condemned a recent terrorist attack by Houthi militias targeting civilians and neighbourhoods in Riyadh and Jizan, Saudi Arabia.

Other major developments in the Cabinet meeting

The Cabinet approved a Draft Law amending five existing laws. The Draft Law aims to apply gradual penalties to those who neglect their professional duties, before being suspended from practising the profession and revoking licenses.

• The Cabinet approved the Kingdom’s joining the Customs Cooperation Agreement and to take the necessary constitutional and legal measures needed to formally enable this. The agreement aims to further strengthen joint cooperation among Arab customs departments and activate coordination across economic and commercial fields.

• The Cabinet agreed to grant the relevant authorities in the Kingdom of Spain the right to legal jurisdiction over the data of its subscribers held in cloud computing centres in Bahrain.

• The Cabinet reviewed a periodical report outlining the efforts of the Ministry of Education in qualifying and training educational staff, and the development of programmes to improve the performance of educational institutions.

• The Cabinet approved the renewal of the membership of the Capital Secretariat in the Arab Towns Organisation and Organisation of Islamic Capitals and Cities.

• The Cabinet was briefed on the progress of work in projects implemented by the Ministry of Labour and Social Development, including the social centre project in Budaiya, the elderly club in Jidhafs, the comprehensive disability complex in A’ali, the Social Care Complex in Hamad Town, the Social Services Complex in Isa Town, and the Project to build a comprehensive social centre in the Capital Governorate.

• The Cabinet also approved the following proposals submitted by the Council of Representatives: to further develop the citizenship curriculum implemented across the Kingdom’s schools, to establish places of worship within the Damistan housing project, to establish a public high school for girls in Damian