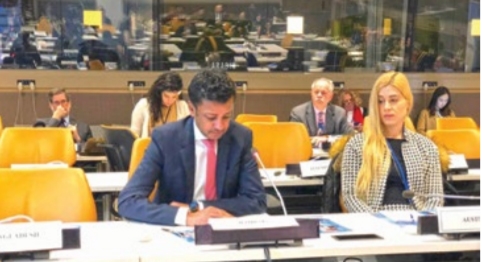 Ambassador Jamal Alrowaiei said that religious freedom is an integral part of the history and culture of the Kingdom of Bahrain, pointing out that the establishment of the King Hamad Global Centre for Peaceful Coexistence is the embodiment of the vision of His Majesty King Hamad bin Isa Al Khalifa in promoting coexistence and peace, as the Centre holds important dialogues, conferences and events on religious freedom, interfaith dialogue, peaceful coexistence between civilisations, in addition to combating hatred, extremism and terrorism.

The Ambassador pointed out that this meeting is a vital opportunity to discuss the most important ways and experiences to implement the UN’s Plan of Action to Safeguard Religious Sites and promote religious freedom in all parts of the world, which is a universal and inalienable right and falls within the framework of efforts to promote tolerance, coexistence and peaceful relations between nations.

The Ambassador touched on the Bahraini experience in this field where the houses of worship, including mosques, churches and temples, are located near each other. He also stressed that the constitution of the Kingdom guarantees protection of places of worship as well as freedom of religion and religious practice.