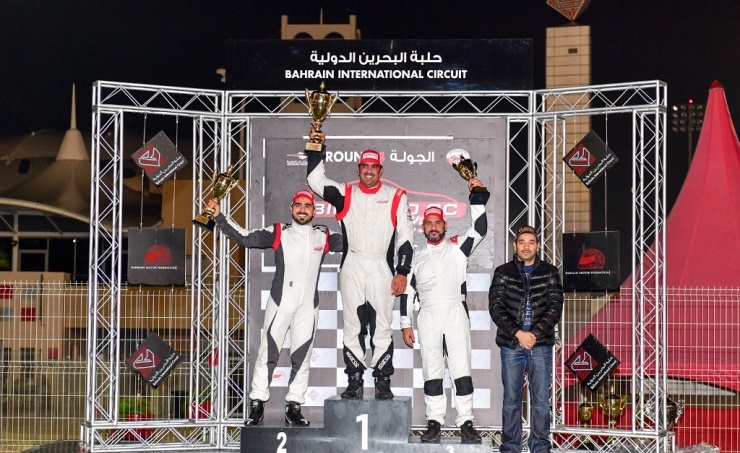 Shaikh Salman topped the Practice timesheet, captured pole position in Qualifying, and then steered his Honda Civic to the chequered flag in both of the meeting’ 12-lap races.

It was a brilliant performance under the bright floodlights of BIC, with the field of competitors needing to overcome the tricky slippery conditions around the circuit’s 2.55-kilometre Inner Track.

National Race Day was also scheduled to feature action in the Bahrain Motorcycle Racing 600, but stewards deemed it to be too dangerous for the riders in the championship due to the wet circuit.

In the 2,000cc Challenge, Shaikh Salman wasted no time in making his presence felt after setting the fastest lap in Practice of one minute 25.032 seconds. He maintained his hot pace in Qualifying where he won pole for the round’s first race with a best lap of 1:23.473, beating out rival Mohammed Faqihi, who was also driving a Civic, by just 0.282s.

In race two, Shaikh Salman started from fifth position following the reverse grid rule, but that didn’t stop him from powering to the front, although not without a late battle with pole-sitter Al Tajer. Shaikh Salman eventually claimed the chequered flag in 16:42.637.

Shaikh Salman capped off his stellar round by posting the race’s fastest lap of 1:21.324.

Following all the action, the winners were presented their respective trophies by officials from BIC, the Circuit Racing Club and the Bahrain Motor Federation.

The BIC 2,000cc Challenge returns to the tarmac with the season’s fifth of seven rounds on January 24.

US storms: At least 11 killed as severe weather hits south