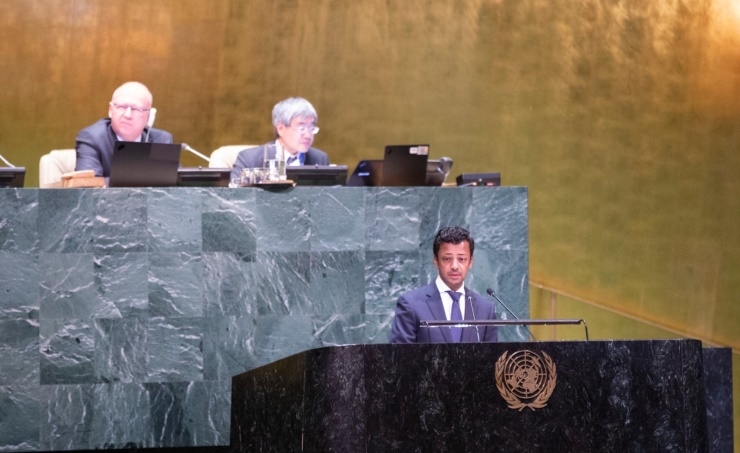 The Permanent Representative thanked the Chair of the Committee on the Exercise of the Inalienable Rights of the Palestinian People and Permanent Representative of Senegal, Cheikh Niang, and all the members of the Committee for their report contained in document (A /74/35) and for their hard work to enable the brotherly people of Palestine to exercise their inalienable rights like the rest of the world.

Ambassador Alrowaiei explained that Foreign Minister Shaikh Khalid bin Ahmed bin Mohammed Al Khalifa, stressed Bahrain's firm stance towards the Palestinian cause in his letter to the Chair of the Committee on the occasion of the International Day of Solidarity with the Palestinian People, in which he stated "As we celebrate the International Day of Solidarity with the Palestinian People, we reiterate Bahrain's firm stance, under the leadership of His Majesty King Hamad bin Isa Al Khalifa, who supports the inalienable legitimate and historic rights of the Palestinian people, like other people of the world, to establish its independent state, with East Jerusalem as its capital, on the borders of June 4, 1967 and in accordance with the two-State solution, the resolutions of international legitimacy and the Arab peace initiative.

He emphasized that the establishment of urgent and comprehensive peace in the region requires continuing and exerting more efforts, and for the international community to assume its responsibilities to confront the Israeli policies that are incompatible with the international laws and customs and affect the Palestinian people, land and sacred shrines, which include the displacement of Palestinians, the confiscation of land, the establishment of illegal settlements and other dangerous practices that require swift and decisive international action to stop it.

The permanent representative referred to the report of the Committee on the Exercise of the Inalienable Rights of the Palestinian People and to the report of the Secretary-General on the peaceful settlement of the question of Palestine, in which he explained Israeli policies contrary to the provisions of the Security Council resolutions, the most important of which are resolutions 2334, 242 and 1515, where the Israeli settlement activities continued with the seizure of Palestinian land, construction of settlements, forced displacement of Palestinians from their lands and transfer of settlers to them, especially in East Jerusalem and the West Bank, and the consequent exploitation of the natural resources and property belonging to the Palestinians without regard for their fundamental rights, in addition to the human and economic suffering caused by the illegal blockade imposed on the Gaza Strip.

The ambassador praised the efforts of the United Nations Relief and Works Agency for Palestine Refugees in the Near East (UNRWA) in providing education and basic services to the Palestinian refugees, stressing the importance of continuing the support of the Agency in order for it to do its best in carrying out its tasks.

He pointed out that the Kingdom of Bahrain, in partnership with the United States, hosted in June a workshop entitled "Peace to Prosperity", which represents a qualitative effort and an important initiative to promote development and provide a better life for the Palestinian people in particular and for the people of the region in general.

The Permanent Representative also stressed the importance of joining efforts of the international community to enable the Palestinian people to obtain and enjoy their inalienable rights, return Palestinian refugees to their homeland and achieve a just and comprehensive peace for everyone in the region to enjoy stability and peace.