Bahrain: A game-changer in Hormuz | THE DAILY TRIBUNE | KINGDOM OF BAHRAIN 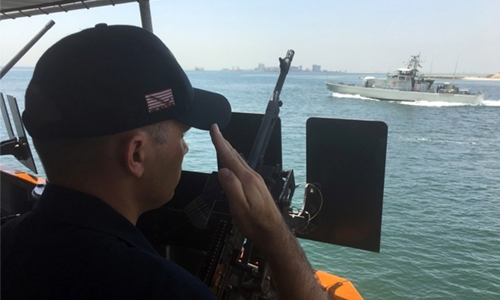 Bahrain: A game-changer in Hormuz

Bahrain’s dramatic entry into the ‘International maritime security mission’ spearheaded by the United States is providing a big boost to the efforts to protect the world’s busiest oil shipping lane, which Iran claims is ‘very easy” for them to shut. Following Bahrain, more nations have started expressing their interest in the mission. Australia is the latest entrant by offering to send a “modest” contribution -- including a frigate, a P8 maritime surveillance aircraft and support staff -- which will also involve British and Bahraini forces.

Even though, the Kingdom has made no mention about its contribution, RBNS Sabha, Bahrain’s lead frigate is expected to perform a major role in the mission.  According to reports, the Royal Bahrain Naval Force is operating a fleet of seven combat vessels, 31 patrol crafts, 10 landing ships and over 700 personnel from its Mina Salman Naval Base. The base also serves as a ship and submarine logistic support base for the entire US fifth fleet.   The lead frigate of the force is RBNS Sabha, formerly known as USS Jack Williams (FFG-24), which the Kingdom received as a gift from the US on 13 September 1996.

Reports further indicate that Bahrain may purchase another frigate from the USA, the USS Robert G. Bradley (FFG-49) this year.  A Congressional Budget Office cost estimate report, citing International Security Assistance Act of 2018 (HR 5677), announced authorising the sale of Oliver Hazard Perry-class frigate USS Robert G. Bradley to the government of Bahrain in 2019.  CBO estimates Bahrain would pay roughly $80 million. “About $10 million of that amount would be deposited in the Treasury, and the remainder would be paid directly to a shipyard located in the United States for refurbishing the frigate,” the CBO report states.

Bahrain’s Naval Force is also set to receive further reinforcements shortly. Vigor, a US Navy contractor, has said that it is building 6 Vigor RB-M Fast Interceptor boats for Bahrain’s coast guard. The RB-M is widely considered the gold standard for Coast Guards and elite law enforcement agencies around the world. Bahrain is also planning to enhance RBNS Sabha. The US State Department, according to naval today, has approved $70 million worth of items and services for the upgrades of Royal Bahrain Navy frigate RBNS Sabha.

Royal Bahrain Naval Service is also reportedly upgrading its German-build Al Manama-class-vessels under a contract with Italian company Leonardo. The upgrade includes a new weapon control system, training services and logistics. All this suggests Bahrain is well prepared to play its part in securing the energy artery of the world. Bahrain’s move also follows the Kingdom hosting a conference on Gulf maritime security slamming “the repeated attacks and unacceptable practices of Iran and the terrorist groups linked to it”.

Washington floated the idea of a naval coalition in June, after multiple attacks on ships in the Gulf, which the United States had blamed on Iran -- but which Tehran denies. The plan was to have each country providing a military escort for their ships, with the US military providing a security backstop, monitoring the zone of operations and providing command and control.

US Secretary of State Mike Pompeo has said that Washington had asked more than 60 nations to assist the Sentinel Programme in the Strait of Hormuz. China, Australia, South Korea and Israel are considering their position following a US request. Italy, Japan, Sweden, Denmark, India are undecided and are yet to announce a decision.  But other European countries have declined to join, for fear of harming European efforts to rescue a 2015 treaty with Iran over its nuclear programme.

Following Bahrain’s announcement, also first in the Middle East to join the mission, US Central Command boss Gen. Kenneth McKenzie Jr. said in a statement that he “welcomes the Kingdom of Bahrain into the International Maritime Security Construct.” “I appreciate His Majesty King Hamad bin Isa Al-Khalifa’s decision to join the United Kingdom and the United States in taking an active role in preserving the freedom of navigation, promoting maritime security and de-escalating regional tensions,” McKenzie told Stars and Stripes.

McKenzie said that he looks forward to working with Bahrain and other nations to secure freedom of navigation in the region. “The free flow of commerce throughout international waterways is a linchpin of the global economy, and we appreciate the Kingdom of Bahrain’s leadership and support in preventing aggression from curtailing that freedom,” McKenzie said.

US base in Saudi

Most recently, the US has also begun re-establishing a military base in Saudi Arabia with troops, warplanes and missile defence battery being deployed at the Prince Sultan airbase south of the Saudi Capital.  Reports say more than 500 US soldiers and airmen are returning to the base at the invitation of King Salman. According to Pentagon, this will provide “an additional deterrent” in the face of “emergent, credible threats” in the region.

However, the situation, according to Russian Foreign Minister Sergey, “has reached a dangerous point fraught with the risk of a large-scale military clash.” Triggering the latest moves are the seizure of a British flagged oil tanker Stena Impero by Iranian Revolutionary Guards commandos after British authorities detained an Iranian tanker on July 4 in the Mediterranean on suspicion it was shipping oil to Syria in breach of EU sanctions.

Iran is now holding a total of three foreign ships in total. On July 14, 2019, the IRGC also detained the Panama-flagged Riah. On Aug. 4, 2019, the IRGC said it had seized another ship purportedly sailing under the Iraqi flag, but did not give its name.