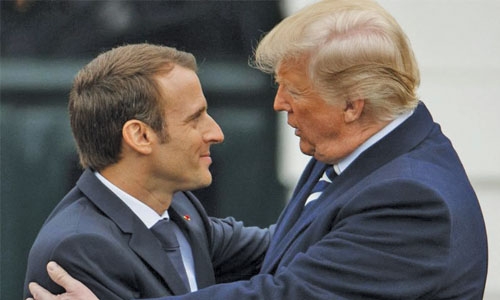 Washington : US President Donald Trump has warned Iran of “big problems” if it resumes the nuclear programme it agreed to curb in a 2015 international accord. Speaking in the White House Oval Office as he hosts French President Emmanuel Macron, Trump called the Iran deal “a disaster” and “insane”.

The US president has been threatening to reject an extension of the Obama-era nuclear pact by a May 12 deadline. Macron is in Washington lobbying Trump to preserve the pact. Germany’s Chancellor Angela Merkel is due to visit the US capital on Friday to make a last-minute bid to dissuade Trump from potentially torpedoing the Iran agreement.

“It won’t be so easy for them to restart,” Trump said on Monday when a journalist asked him about the possibility of Iran re-launching their nuclear programme if the deal is scrapped.

He added: “We’re not going to allow certain things to happen that are happening. The Iran deal is a disaster. They’re testing missiles. What’s that all about?”

Trump’s stark warning comes a day after Iranian President Hassan Rouhani threatened “severe consequences” if the US withdraws from the nuclear deal.

Rouhani did not specify what retaliatory action Tehran might take. But his Foreign Minister, Javad Zarif, has said a probable response would be to restart the enrichment of uranium - a key bomb-making ingredient.