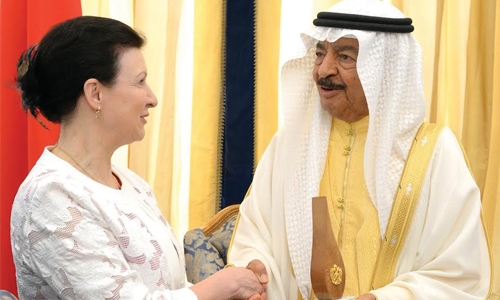 A glimpse into the history of the Habsburg family

Manama : Prime Minister HRH Prince Khalifa bin Salman Al Khalifa has become the first Arab Prime Minister to receive the ‘Flame of Peace’ Award granted by the Association for the Furtherance of Peace. Prince Khalifa was presented the award by the association president Archduchess Herta Margarete at a ceremony held in the capital Manama, in the presence of Vice-President Archduke Sandor von Habsburg, ministers and senior Bahraini officials.

This award to the Prime Minister has urged researchers to look into history of the Habsburg family, which enjoys a long history as one of the oldest dynasties in Europe.

The Association has played a prominent role in support of the humanitarian action, international peace and closer relations between the peoples of the world.

The House of Habsburg, or House of Austria, was one of the most influential Royal houses of Europe. The throne of the Holy Roman Empire was continuously occupied by the Habsburgs between 1438 and 1740.

From the sixteenth century, following the reign of Charles V, the dynasty was split between Austrian and Spanish branches. Although they ruled distinct territories, they nevertheless maintained close relations and frequently
intermarried.

The House takes its name from Habsburg Castle, a fortress built in the 1020s in present-day Switzerland by Count Radbot of Klettgau, who chose to name his fortress Habsburg. His grandson Otto II was the first to take the fortress name as his own, adding “Count of Habsburg” to his title.

The House of Habsburg gathered dynastic momentum through the 11th, 12th, and 13th centuries. By 1276, Count Radbot’s seventh generation descendant Rudolph of Habsburg had moved the family’s power base from Habsburg Castle to the Duchy of Austria. Rudolph had become King of Germany in 1273, and the dynasty of the House of Habsburg was truly entrenched in 1276 when Rudolph became ruler of Austria, which the Habsburgs ruled until 1918.

A series of dynastic marriages enabled the family to vastly expand its domains to include Burgundy, Spain and its colonial empire, Bohemia, Hungary, and other territories. In the 16th century, the family separated into the senior Habsburg Spain and the junior Habsburg Monarchy branches, who settled their mutual claims in the Oñate treaty.