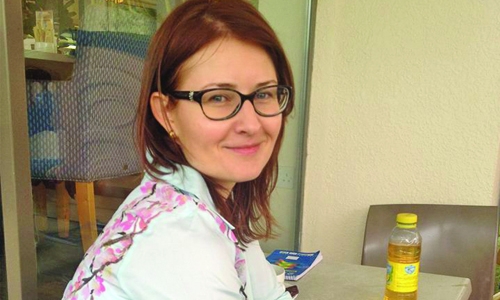 Manama : Music is a wonderful thing – everyone would agree on that. But what happens when music is taken more seriously, rather than as a fun hobby? Then music has the capacity to move your emotional self; and music therapy is all about utilising that power for health and wellbeing.

DT News had a chit-chat with Aksana Kavaliova-Moussi, Music Therapist, who is keen to spread awareness in Bahrain about the benefits of music therapy.

Aksana attained her Bachelor’s degree in Music Therapy in Canada in 2008, and her Master’s in Music Therapy in USA in 2014. She says, “As a Music Therapist, I utilise music and music elements to address different functional areas of living, ranging from psycho-emotional to communicative, cognitive, fine and gross motor skills.”

“It is also a wonderful therapy for pregnant mothers and women in labour, as music helps in pain relief and provides support during the whole process”, she said. Studies have shown that babies in their mother’s tummy can hear sounds and feel the emotions of their mother, and playing music is a fine example of reaching out to both the baby and the mother simultaneously.

“I myself used music during the delivery of my daughter in 2010 at Awali hospital. The staff was very positive and accommodated my needs,” she said.

She has worked with children with special needs, including those suffering from Autism Spectrum, Down syndrome, communication delay, Cerebral Palsy, Learning Disabilities, ADHD.

“Music engages and transforms the entire brain, enhancing and optimising neural connections. What I love about music therapy, and what makes it different from many other therapies, is its humanistic approach – there is no prescription – it’s client-tailored and very personal,” she said.

She talked about her internship as a music therapist in Canada, at a paediatrics unit in a hospital, where she said the children seemed exceptionally non-stressed, and there was a wonderful spirit of collaboration between the parents, children and therapists.

“It gives adults and children, undergoing hospitalization, a sense of control and power over their choices. It takes the attention away from the stressful environment,” according to her, adding it often shortens hospital stays.

Music’s healing powers have also often made it to the silver screen. Spanish movie The Sea Inside shows a person, who became quadriplegic following a swimming accident, in his imagination, standing up, running and flying out of the window after listening to his favourite music track.

“Music decreases cortisol production (responsible for stress) and increases endorphins (neurohormones, which relieve stress, block pain, boost mood, increase appetite, and enhance the immune system). Music also triggers the brain to release dopamine, a “feel good” hormone responsible for motivation,” Aksana explained. Each therapy session is based on the music the person likes, on that day and in that particular mood, bringing together the overall environment.

“I was working with a hospice company in Detroit, during my internship, when we visited a Middle Eastern elderly lady who was dying. We ended up finding just the right song for her, although it was sung a little differently, and her daughter  was moved to tears. It was an Arabic song called ‘Habibi,’ which is generally considered a very happy song. But I sang it in a sad, soft and nurturing manner. Everyone was equally moved. This was the last song she listened to, and I’m glad it was the right song for her at such an important transition,” she recalled.

Aksana clarified that music therapy is not just about using classical and sophisticated music, but covers the whole range of music on this planet – “If someone likes rap, then they like rap! We encourage them to choose what they want and, as a Music Therapist, my role is to help them find what works for them.”

Science has evidence that music and consciousness are very much linked. Much like a psychologist would help someone find “their own voice” during a talk session, music therapy is an avenue to explore, process, integrate and transmute all the parts that we carry within ourselves, in a more imaginative way, so we can become more
whole.

Aksana can be reached through her website or on www.aksanamusictherapy.webs.com and a glimpse of her work can be seen on Instagram: aksana_musictherapy 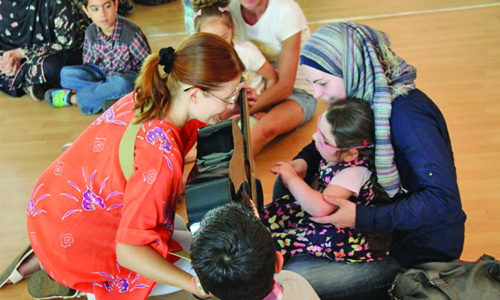 Aksana during her sessions with kids