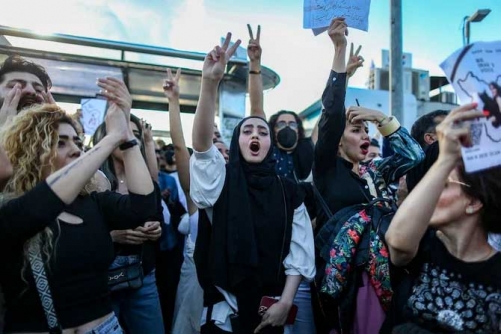 At least 92 people have been killed nationwide in Iran’s crackdown on two weeks of protests that erupted following the death of Mahsa Amini who had been arrested by the morality police, the Norway-based Iran Human Rights (IHR) NGO said yesterday.

“The international community has a duty to investigate this crime and prevent further crimes from being committed by the Islamic Republic,” said IHR director Mahmood Amiry-Moghaddam. Its previous toll had said 83 people were confirmed to have been killed in the protests.

Meanwhile in the city of Zahedan in the southeastern province of Sistan-Baluchistan, at least 41 people were killed by the Iranian security forces in clashes that erupted last week, IHR NGO said. IHR accused the security forces of “bloodily repressing” a protest that erupted on Friday after prayers in Zahedan over accusations a police chief in the port city of Chabahar, also in Sistan-Baluchistan province, had raped a 15-year-old girl from the Sunni Baluch minority.

It said the identities of those killed had been confirmed by the regional NGO Baluch Activists Campaign (BAC). Iran says five members of the Revolutionary Guards were killed in Zahedan in what official media described as a “terrorist incident”. Ali Mousavi, IRGC intelligence chief of Sistan and Balochistan, was shot during the confrontation with protesters. The IRGC-affiliated Tasnim News Agency reported that Mousavi was pronounced dead at a hospital.