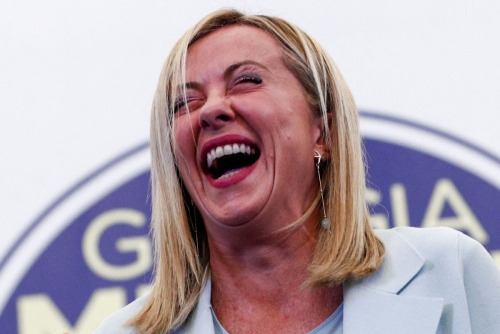 Giorgia Meloni is on course to become the first female prime minister of Italy as her party the Brothers of Italy is predicted to win between 22-26% of the vote, according to exit polls.

If Meloni’s party is elected, the European Union will likely take it with concern, as her party is the most rightwing party to govern Italy after the World War II and there are fears that due to close ties between Brothers of Italy and Russia, Italy may go soft on Russian president Putin for his so called ‘military operation’ in Ukraine.

Meloni’s Brothers of Italy party is likely to have control of both houses, the Senate and the Chamber of Deputies. She is projected to win more than a quarter of the vote for the Senate.

Following the exit poll Meloni said: “It is a starting point, not a finish line.”

Both leaders have in the recent past questioned the rhetoric on Vladimir Putin.

Berlusconi claimed that the West pushed him into the war while Salvini questioned the sanctions.

Her rivals, Enrico Letta’s Democratic Party and Giuseppe Conte’s Five Star Movement, together could win 35% of the votes and convince allies like More Europe and the Italian Left/Greens and also the moderate Third Pole but Conte and Letta do not see eye-to-eye.

Italian president Sergio Mattarella will consult party leaders to determine who can lead a stable government and Meloni has the highest number of votes and remains in pole position.

The new government is the most right-wing government in Italy since its World War II days under dictator Benito Mussolini.

Meloni’s recent speech at a rally by Italian right-wing party Vox contained a line that scared many: “Yes to the natural family, no to LGBT lobbies!”.

She also said a naval blockade around Libya would address the migrant issue.

Right-wing parties in Europe are also excited for this new phase that Italian politics is about to witness.

Speaking to the BBC, a professor Gianluca Passarelli of Rome’s Sapienza University, said: “Meloni is not a danger to democracy, but a danger to the European Union.”