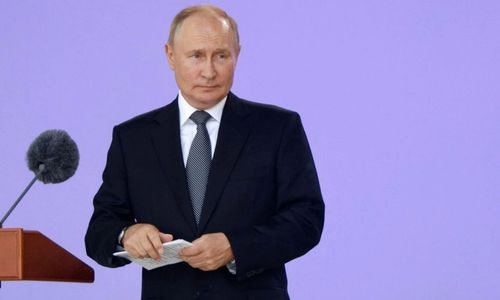 Vladimir Putin is offering Russian mothers cash and an honorary title, as his country faces a demographic crisis, according to media reports. The Russian leader will revive the "Mother Heroine" award that was first established under Soviet leader Josef Stalin in 1944, which was given to more than 400,000 women before being scrapped post the fall of the USSR in 1991.

The prize is awarded on the condition that the other nine children are still alive. However, exceptions will be made for mothers whose children died, or went missing "in defence of the Fatherland", or in the performance of "military service or civil duty".

The title is to be included on Russia's list of highest-ranking state orders, such as the "Hero of Russia" and "Hero of Labor".

The decree instructs recipients to wear the award — a five-pointed star surrounding the Russian state emblem, next to the "Mother Heroine" wording— on the left side of the chest.

Russia's population has been in decline for decades, with figures released in July by the state statistics agency Rosstat showing it had fallen to 145.1 million. This followed a decline of an average of 86,000 people per month for the first six months of the year, that had been a record.

It is estimated that Russia's population will fall to about 132 million in the next two decades, with the United Nations predicting that in a worst-case scenario, its population could almost halve, to just 83 million by the start of the next century.

Adding to the demographic crisis are the tens of thousands of Russian troops who have died in the Russia-Ukraine conflict, according to some estimates, and the hundreds of thousands who have left the country because of the war.

According to Dr Jenny Mathers, Russian politics and security expert, in an interview with broadcaster Henry Bonsu on Times Radio about the new Russian reward scheme, Putin has been on record saying that people who have large families are “more patriotic”, and will feel more connected to “mother Russia”.

The Russian leader is the youngest of three brothers, and the only one to survive childhood. His eldest brother, Albert, died in infancy in the 1930s, and his other brother, Viktor, died in 1942, during the Nazi siege of Leningrad, which is present day St. Petersburg.

Putin is known to have two daughters with his former wife, Lyudmila. However, he is also widely believed to have other children with Alina Kabaeva, an ex-Olympic gymnast, although this has never been publicly confirmed.