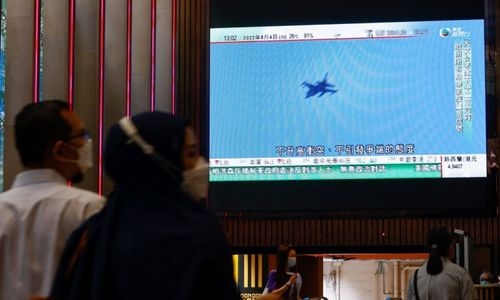 China launched unprecedented live-fire military drills in six areas that ring Taiwan on Thursday, a day after a visit by US House of Representatives Speaker Nancy Pelosi to the self-ruled island that Beijing regards as its sovereign territory.

Soon after the scheduled start at 0400 GMT, China's state broadcaster CCTV said the drills had begun and would end at 0400 GMT on Sunday. They would include live firing on the waters and in the airspace surrounding Taiwan, it said.

Map showing the six locations where China will conduct military drills. Taiwan's cabinet spokesman, expressing serious condemnation of the drills, said also that websites of the defence ministry, the foreign ministry and the presidential office were attacked by hackers.

By midday on Thursday, military vessels from both sides remained in the area and in close proximity. Taiwan scrambled jets and deployed missile systems to track multiple Chinese aircraft crossing the line.

"They flew in and then flew out, again and again. They continue to harass us," the Taiwanese source said.

China, which claims Taiwan as its own territory and reserves the right to take it by force, said on Thursday its differences with the self-ruled island were an internal affair. "Our punishment of pro-Taiwan independence diehards, external forces is reasonable, lawful," China's Beijing-based Taiwan Affairs Office said.

Wang, speaking at a meeting of Southeast Asian foreign ministers in Phnom Penh, Cambodia, said China had made the utmost diplomatic effort to avert crisis, but would never allow its core interests to be hurt.

The foreign ministers in a statement had earlier warned that volatility caused by tensions in the Taiwan Strait could lead to "miscalculation, serious confrontation, open conflicts and unpredictable consequences among major powers".