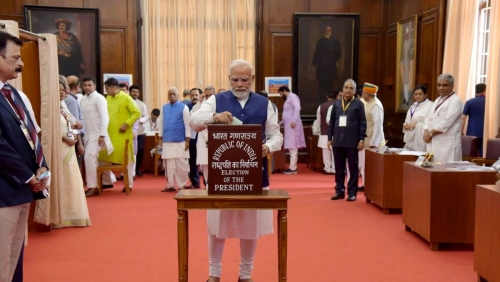 PM Modi casts his vote for next president of India

Prime Minister Narendra Modi cast his vote as polling began on Monday in the Parliament and respective State Legislative Assemblies to elect a new President of India.

Draupadi Murmu is the NDA candidate, who is contesting against Yashwant Sinha, supported by the Opposition parties.

A polling booth has been set up inside the Parliament premises where Members of Parliament will cast their votes. The Rajya Sabha's Secretary General is the Returning Officer for this election.

The President is elected by members of the Electoral College consisting of elected Members of Parliament and that of all the state Assemblies, including National Capital Territory of Delhi and the Union Territory of Puducherry.

Meanwhile, the Monsoon Session of Parliament will commence today and will continue till August 12. There will be 18 sittings during the Session.

Price rise, Agnipath scheme and unemployment are some of the issues which are likely to be raised by the Opposition during the Monsoon session.

Various Bills including Family Courts (Amendment) Bill, Forest (Conservation) Amendment Bill, Press and Registration of Periodicals Bill are likely to be taken up in the session.

Britain on course for hottest day on record