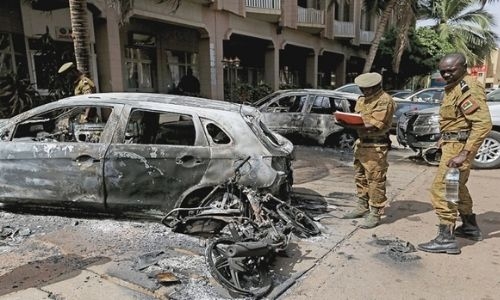 At least 11 civilians were killed in attacks on two villages in northern Burkina Faso, a regional governor said in a statement. Unidentified armed assailants targeted the two communities in Seno province, which is among those hit by rising insecurity as jihadist groups with links to al Qaeda and Islamic State seek to gain control over once peaceful parts of West Africa's Central Sahel region, Reuters reports.

In a statement on Monday, Governor Rodolphe Sorgho did not provide further details on the attacks but called on locals to be vigilant. A local official, speaking on condition of anonymity, said a further 14 civilians, who were recorded as missing after the raids, had been found dead.

Reuters could not independently verify the information. In recent years, Islamist violence has killed thousands of people and forced more than 2 million to flee their homes in the Sahel.

On Saturday, the Burkinabe army said five soldiers had been killed repelling a large-scale militant attack in the Central-North region earlier that day. It said its forces killed some thirty militants in the encounter.

Public frustration with the authorities' handling of the security situation led to protests in Burkina Faso that culminated in a military coup in January. The crisis in the Sahel started when militants took over neighbouring Mali's desert north in 2012, prompting France to intervene the following year in an attempt to push them back. But the insurgents have regrouped in recent years and seized more territory.