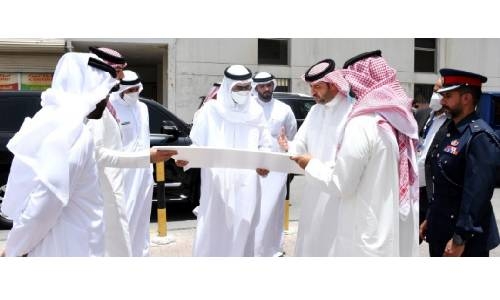 Southern Governor, His Highness Shaikh Khalifa bin Ali bin Khalifa Al Khalifa, yesterday inspected a number of public facilities in Riffa, as part of his field visits to various regions across the governorate to follow up on the needs of the local citizens, which reflects his keenness to provide the best services to the citizens.

HH Shaikh Khalifa bin Ali affirmed the Southern Governorate’s keenness to carry on its visits to all regions to be informed about the citizens’ needs and remarks, in line with the directives of His Majesty King Hamad bin Isa Al Khalifa and His Royal Highness Prince Salman bin Hamad Al Khalifa, the Crown Prince and Prime Minister, in this regard.

His Highness indicated that field communication is the core of the Southern Governorate’s work in order to collect first-hand information about the citizens’ needs and verify the quality of the services delivered to them.

The governor visited, along with the Chairman of the Sunni Endowments Council, Dr. Shaikh Rashid Al-Hajeri, the Eid Musallah (praying area) in Riffa, and was informed about the progress of its development.

At the end of the field visits, HH Shaikh Khalifa bin Ali affirmed the continuity of coordination and cooperation between the Southern Governorate and the relevant authorities to deliver the best services to the citizens.