He has got the wrong idea: Shatner on Prince William's remark on space tourism | THE DAILY TRIBUNE | KINGDOM OF BAHRAIN 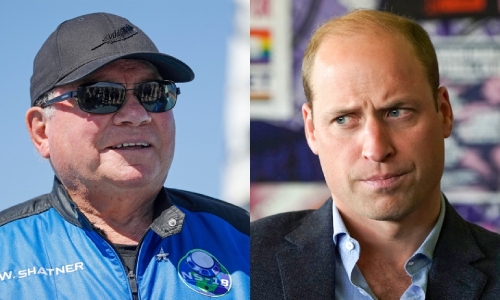 Star Trek actor William Shatner pushed back at Prince William over his recent comments about space tourism, saying the British royal has "got the wrong idea" about space travel.

In an interview this week, the Duke of Cambridge said those engaging in space tourism should focus on solving problems on Earth first, adding that he hoped the world's great minds would focus on environmental action.

"He's a lovely Englishman. He's going to be king of England one day," Shatner said in a Thursday interview with Entertainment Today. "He's a lovely, gentle, educated man, but he's got the wrong idea."

Shatner himself went to the edge of space on Wednesday in Blue Origin's New Shephard rocket, which he described as "the most profound experience."

Shatner said the point of space flight wasn't to show off, but to establish the first steps toward moving polluting industries off of Earth and into space.

"The prince is missing the point. The point is these are the baby steps to show people [that] it's very practical. You can send somebody like me up into space," he told ET. Jeff Bezos also said that all heavy industries and polluting industries should be moved to space after his July spaceflight in New Shephard.

Despite their visions of sustainability, trips to space produce huge amounts of carbon dioxide, which can linger in the atmosphere for years, and the idea of shipping unwanted industries to space would present an expensive logistical nightmare that likely wouldn't be possible any time in the near future.

"The idea the space race is on at the moment, we've seen everyone trying to get space tourism going - it's the idea that we need some of the world's greatest brains and minds fixed on trying to repair this planet, not trying to find the next place to go and live," Prince William said.