US, Taliban had 'productive' talks on humanitarian aid - State Department | THE DAILY TRIBUNE | KINGDOM OF BAHRAIN 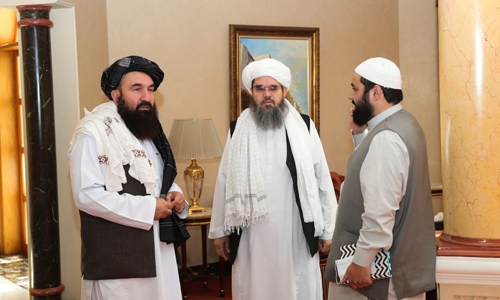 The United States and the Taliban had "productive discussions" on the issue of humanitarian assistance for Afghanistan during meetings in Qatar over the weekend, State Department spokesperson Ned Price said on Tuesday, describing the talks as "largely positive."

Officials discussed humanitarian access during the two days of meetings between Taliban representatives and U.S. officials including some from the intelligence community and the U.S. Agency for International Development.

Price said the talks focused on security and terrorism concerns, safe passage for foreign nationals and Afghan allies of the United States to leave the country, as well as human rights.

Washington has repeatedly called for Afghanistan's new rulers to demonstrate a respect for human rights, including the rights of women and girls, in order to win international legitimacy.

"The delegation made clear, as we consistently have, that the Taliban will ultimately be judged not only on its words but solely on its actions," Price said.

A separate meeting with Taliban representatives involving officials from the European Union as well as U.S. officials took place on Tuesday, Price added.

Since the Taliban took power in August, Washington has frozen bilateral assistance to Afghanistan but says it is still providing aid through non-governmental groups. There are calls for government reserves held in the United States to be made available to the new Taliban-led government to ease a growing humanitarian crisis.