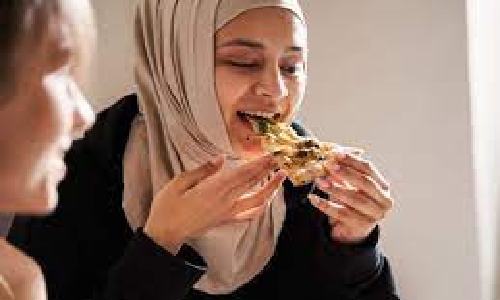 New Iranian TV censorship rules have banned women from eating pizza and sandwiches on screen, according to opposition sources.

Not only this, men should not be shown serving tea to women in workplaces and women must not be shown drinking any red-coloured drinks.

Women must also not wear leather gloves on screen.

The new guidelines have been issued by government officials to broadcasters and film-makers following an audit, according to IranWire.

Any scenes or photographs showing men and women in a domestic setting will be cleared by the Islamic Republic of Iran Broadcasting (IRIB) before broadcast to ensure that the new guidelines are followed, Amir Hossein Shamshadi, head of PR at IRIB said.

The IRIB is also responsible for licensing and overseeing Iranian home theatre and streaming platforms, via a subsidiary called Satra.

Some Iranian streaming sites will self-censor to avoid facing fines from authorities in Tehran.

Only her voice was heard during the show.

Veteran actor Amin Tarokh took to Instagram to complain, writing, "I wish the guest's name had been subtitled, at least.

Because we didn’t see her face at all, had the host not mentioned it [at the beginning], we’d have no idea which artist was being talked about!

What pleasure is derived from getting a close-up look at the creators of the program, and a far-off one at the guest, just because they’re a woman?

All you get from the IRIB is a voice and no picture."

93% rental cases settled in a month in Bahrain