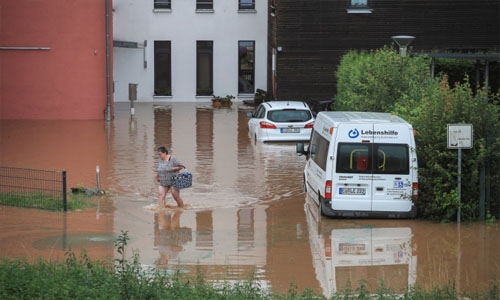 Heavy rain and once-in-a-generation floods on Wednesday night caused the collapse of six houses in Germany's western state of Rhineland-Palatinate, leaving several people missing and many stranded on rooftops, police said on Thursday.

Some 30 people were missing and about 25 more homes were at risk of collapse in the district of Schuld bei Adenau, in the hilly Eiffel region, SWR broadcaster said earlier, citing police, Reuters reported.

"We currently have an unclear number of people on roofs who need to be rescued," a spokesperson for the Koblenz police said."There are many places where fire brigades and rescue workers have been deployed. We do not yet have a very precise picture because rescue measures are continuing," the spokesperson added.

Two fireman drowned and the army was deployed to help stranded residents on Wednesday, after a slow-moving low-pressure weather system caused once-in-a-generation floods.

Rail, road and river transport was disrupted with shipping suspended on the Rhine river.

Heavy rainstorms could be expected in southwestern Germany on Thursday, with continuous rains until Friday evening, the German Weather Service warned in a morning bulletin.