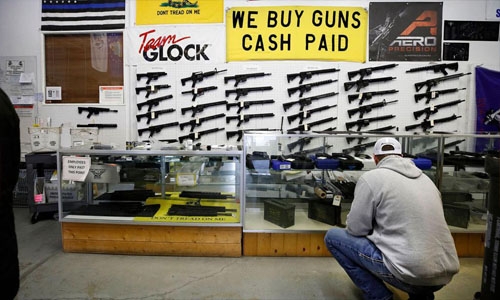 A US judge overturned California’s three-decade-old ban on assault weapons Friday in a move swiftly condemned by the state’s governor Gavin Newsom as gun-related homicides surge across America.

In a 94-page decision, federal Judge Roger T Benitez described California’s assault weapons ban -- in place in 1989 -- as unconstitutional and defended the right of Americans to own semi-automatic rifles. “As the Swiss Army Knife, the popular AR-15 rifle is a perfect combination of home defence weapon and homeland defence equipment,” he wrote. “Guns and ammunition in the hands of criminals, tyrants and terrorists are dangerous; guns in the hands of law abiding responsible citizens are better,” he argued.

Benitez said he would give the state 30 days to appeal the decision, which Governor Newson said posed a “direct threat to public safety” and which he vowed to challenge.

“We’re not backing down from this fight, and we’ll continue pushing for common-sense gun laws that will save lives,” he said in a statement. The decision comes as gun violence surges across the United States -- and just over a week after a disgruntled, heavily-armed California public transit worker shot and killed nine people. A search this week of the shooter’s home -- which was set ablaze shortly before the attack -- turned up 12 guns, around 22,000 rounds of ammunition and suspected Molotov cocktails. Mass shootings have also taken place in Florida, Indiana, California, Colorado and Georgia, in a surge in violence that President Joe Biden has branded an “epidemic.”

The US Supreme Court is also due to hear a challenge backed by the gun lobby to a New York law that restricts the carrying of firearms outside the home. It will be the first major case involving the Second Amendment constitutional right to bear arms heard by the nation’s highest court in more than a decade.