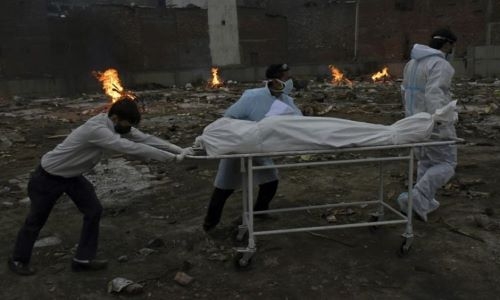 With coronavirus cases surging to record levels, Indian Prime Minister Narendra Modi is facing growing pressure to impose a harsh nationwide lockdown amid a debate whether restrictions imposed by individual states are enough.

Many medical experts, opposition leaders and some of the Supreme Court judges have suggested the lockdown seems to be the only option with the virus raging in cities and towns, where hospitals are forced to turn patients away while relatives scramble to find oxygen.

On Friday, India recorded a new record of 414,188 confirmed cases in the past 24 hours, Its tally has risen to more than 21.4 million since the pandemic began with faint hopes of the curve going down quickly, said an AP report.

The Health Ministry also reported 3,915 additional deaths, bringing the total to 234,083. Experts believe both figures are an undercount. The official daily death count has stayed over 3,000 for the past 10 days.

Over the past month, nearly a dozen out of India’s 28 federal states have announced less stringent restrictions than the nationwide lockdown imposed for two months in March last year.