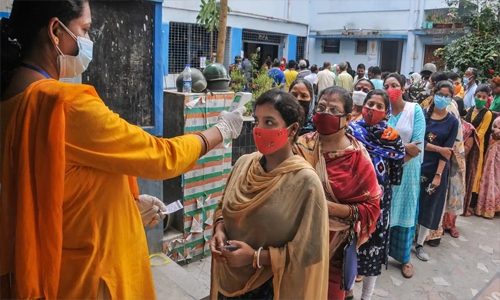 Polling began at 7 am on Tuesday for one of the busiest days in the ongoing Assembly election in all four states and one Union Territory - West Bengal, Assam, Kerala, Tamil Nadu and Puducherry.

Polling is being held for a total of 475 of the total 824 assembly constituencies across the states of Assam, Kerala, Tamil Nadu, West Bengal and the Union territory of Puducherry.

While for West Bengal, the day marks the third in an eight-phase election, in Assam it is the third and final phase of voting. The remaining states/UT –Kerala, Tamil Nadu and Puducherry are witnessing a single-phase polling. Counting for all the polls will be held on May 2.

The polling in West Bengal and Assam had commenced from March 27. The last phase of West Bengal polls will take on April 29. The counting of votes for elections to four states and one UT will be held on May 2.

As many as 18.68 crore electors will cast vote at 2.7 lakh polling stations in Tamil Nadu, West Bengal, Kerala, Assam and Puducherry, Arora had said during a press conference here.

Across Kerala, the response to polling was enthusiastic and after the first two hours of the poll, 10 per cent of the electorate had cast their votes, said the State Election Commission officials on Wednesday.

The ruling Left led by its 'Captain' Chief Minister Pinarayi Vijayan cast his vote at his home town in Kannur and later said, "The writing on the wall was very evident, right from the time the campaign started we could sense the mood of the people and the Left will retain power."

In Haripad in the Alappuzha district, the Leader of Opposition Ramesh Chennithala was spotted at his home turf accompanied by his family. After casting his vote, he said it would be a historic win for the Congress-led UDF which would regain power.

Meanwhile, state BJP president K.Surendran, who is contesting from two constituencies said this time it's a crucial election for them.

State Congress president Mullapally Ramachandran was confident of the outcome and he said the UDF will score a 'century' as people are badly waiting for a change in governance.

Leaders of various political parties, several movie actors and the general public voted early on Tuesday after the voting started at 7 a.m. in Tamil Nadu.

Similarly, the Chief Electoral Officer Satyabrata Sahoo, who is managing the poll show in the state, too cast his vote.

From the movie field Rajinikanth, star couple Ajit Kumar and Shalini, Surya, Karthi, Sivakumar too have cast their votes.

Brisk polling was witnessed in the 234 Assembly constituencies in Tamil Nadu. A total of 88,937 polling booths are there in the state and over 1,59,165 electronic voting machines have been deployed.

Modi appeals to people to 'vote in record numbers'

"Our secular progressive alliance is all set for a landslide victory as people of Tamil Nadu want a change," he says

Makkal Needhi Maiam chief Kamal Haasan, his daughters Shruti Haasan and Akshara Haasan stand in a queue as they await their turn to cast vote.

'Metro Man' E Sreedharan cast his vote at a polling station in Ponnani. "BJP will have an impressive show this time, there's no doubt about it. I will win from the Palakkad constituency with a big margin. My entry into BJP has given a different image to the party," he said. He is the BJP candidate from Palakkad.

West Bengal: Polling yet to begin in Arambag, Hooghly

Here is all you need to know about the polling in the four states and Puducherry:

In 2016 Assembly polls were held in two phases.

This phase will decide the fate of 337 candidates across 40 constituencies of 12 districts in the state, including the senior minister and Bharatiya Janata Party (BJP) leader Hemanta Biswa Sarma in the Jalukbari constituency.

From BJP, MLAs Atul Bora from Dispur, and Suman Haripriya from Hajo are also in the fray. The fate of sitting Congress MLA Rekibuddin Ahmed, former AGP MLA Kamala Kalita from Chaygaon, and Assam Jatiya Parishad (AJP) working president Pabindra Deka from Pathacharkuchi will also be decided in the third phase.

Barama constituency, from where Kokrajhar's Lok Sabha MP Naba Kumar Sarania is contesting the polls as an Independent candidate will also go into polling in the last phase.

The election for 140-member Kerala Assembly in 14 districts is being held in a single phase on April 6.

The state is ruled by the Left Democratic Front (LDF), which had won 91 seats in the 2016 Assembly elections defeating the United Democratic Front that bagged only 47 seats. BJP-led National Democratic Alliance, the third constituent in the triangular contest the state is headed into. The presence of the BJP, which is positioning itself as a political alternative with candidates like the Metroman 'E Sreedharan' will impact the attempts made by both the LDF and the UDF to swing the constituencies to their favour.

Polling for 30 assembly seats in Puducherry is being held today. Of the 30 Assembly seats, five are reserved for the Scheduled Caste candidates. As many as 10,02,589 electors will choose the candidates for the 15 legislative Assembly of Puducherry.

The Congress-led government in the Union Territory fell before completing its five-year term under the Chief Minister V Narayansamy.

Narayanasamy had resigned on February 22 ahead of a floor test in the 33-member House (including three nominated) following the resignations of five Congress and one Dravida Munnetra Kazhagam (DMK) legislators. On February 23, President Ram Nath Kovind accepted the resignation of Puducherry Chief Minister V Narayanasamy and his council of ministers.

Kiran Bedi was replaced as Puducherry L-G with Telangana governor Tamilisai Soundararajan being given the additional charge of the Union Territory.

Campaigning for Assembly polls in Puducherry ended on Sunday with all the players including the NDA and Congress-DMK alliances putting in their best efforts to woo voters in 30 assembly seats for the polls on April 6.

The Union Territory is witnessing a tough battle essentially between these two alliances. The National Democratic Alliance in the Puducherry is a rare case where the BJP is not the largest constituent of the alliance. The BJP is contesting on nine seats with the alliance led by the All India NR Congress contesting on 16 seats, and the AIADMK on five seats.

The Congress, whose government in the Union Territory fell in February before completing its five-year term under the Chief Minister V Narayansamy, has also ceded its ground to its allies in Puducherry, giving 13 seats to the DMK and one each to the Communist Party of India and the Viduthalai Chiruthaigal Katchi. The party skipped fielding former Chief Minister Narayanasamy and is contesting on only 14 out of its 15 seats.

Congress has not fielded any candidate from Yanam constituency, the second seat from where AINRC chief N Rangasamy is contesting. To Narayanasamy, the party has given the responsibility of campaign and election management.

Tamil Nadu assembly elections are being held today in a single phase.

Polling across 234 Assembly constituencies in 38 districts of Tamil Nadu will begin at 7 am on Tuesday. A total of 3,998 candidates are in the poll fray. In view of COVID-19, the number of polling stations has been increased to 88,937. The counting of votes will be done on May 2.

The AIADMK launched scathing attacks against the DMK for practising dynastic politics and promised development. On the other side, Stalin has called the AIADMK government a slave to the BJP and alleged corruption during its tenure. Stalin said the AIDMK government has taken Tamil Nadu back 50 years.

In Tamil Nadu, the people have traditionally seen the DMK and the AIADMK hold power alternately since 1967. However, AIADMK emerged victorious in the last two Assembly elections. This is the first Assembly elections being held without two veterans of Tamil Nadu politics, M Karunanidhi and J Jayalalithaa.

West Bengal: In the high stake West Bengal polls, voting for this phase will be held in 31 Assembly constituencies in three districts - eight in Hooghly, seven in Howrah and 16 in South 24 Parganas.

There are 205 candidates in the fray in this round of polling, with Diamond Harbour having the maximum number of candidates at 11.

Among the most high-profile candidates, it is BJP's Swapan Dasgupta contesting from Tarakeswar constituency in Hooghly. Dasgupta, a noted journalist and a Padma Bhushan awardee has been a Rajya Sabha member who resigned recently to contest the Assembly polls.

Of the three districts, South 24 Parganas has significant importance for both the top parties in the fray - Trinamool Congress (TMC) and the Bharatiya Janata Party (BJP). Diamond Harbour is the parliamentary constituency of TMC leader Abhishek Banerjee, the nephew of West Bengal Chief Minister Mamata Banerjee.

For the Assembly Elections 2021, the Election Commission has issued a protocol for voting. All poll officials will be vaccinated against Covid-19 before elections for five assembly polls, the commission said.

ECI guidelines for the upcoming elections include-- door-to-door campaigning to be restricted to five persons including the candidate, polling officials to be vaccinated, separate norms for suspected Covid-19 patients.

Rescuers hunt for survivors after cyclone wreaks havoc in Indonesia