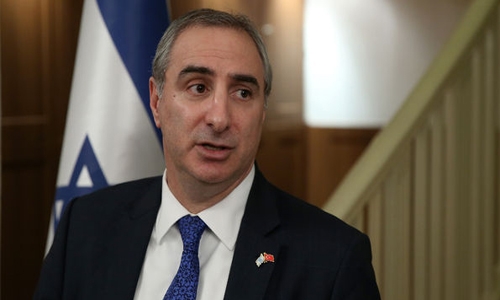 When Ambassador Eitan Na’eh completed the prestigious diplomatic Cadet Course in Israel nearly 30 years ago, he did not imagine Abu Dhabi as a possible posting destination. Having served in Turkey, Azerbaijan, Baku, the UK and US, Na’eh who’s had his share of ‘firsts’ says this posting feels different.

“The whole thing is historic on a national level and a personal level. The feeling is of excitement and we would like to start work,” he says.

Na’eh, who for many years had hoped for a diplomatic breakthrough like the Abraham Accords, believes this marks the beginning of greater regional stability.

As a young diplomat in the ’90s, Na’eh watched the peace signing ceremony with Jordan and the Oslo Accords, hoping it would then expand to the entire region. Following his appointment as Israel’s first Head of Mission to the UAE, Na’eh started receiving messages of congratulations from people in Iraq, Kuwait, Morocco and other regional players who expressed hope to see this peace flourish.

While Ambassador Na’eh is the first diplomatic appointment following the signing of the Abraham Accords, he is not the first Israeli official in the region, he stresses. A lot of groundwork has already been done, and with the establishment of a permanent mission and future embassy, the relations can now be taken to the next level- across all sectors.

While there have been incredible enthusiasm in many fields including, finance, health, agri-tech, water security, culture and more, building a strong and long-lasting peace must be implemented through education, says Na’eh, referencing a recent meeting between both ministers of education.

“The ministers are looking to advance programmes at various levels, from high education to schools, high schools, and more. There are plans on the way, visits and programmes that are being developed together in both countries. Almost every government office has begun cooperation.”

In the short period of time since tourism opened up between the two countries, some 130,000 Israelis have already visited the UAE. Na’eh believes the UAE will continue to see a high volume of tourists from Israel and looks forward to seeing Emiratis visit their country once borders open up.

One of the key components for any Israeli mission is working with the local Jewish community. Ambassador Na’eh says they have already begun planning joint programmes and interfaith initiatives and will be hosting a celebration for Tu Bishvat, the ‘Jewish new year for fruit trees’ later this week.

Above all, Na’eh says he is ready to get to work. “We are really looking forward to working together with the Emiratis on strengthening the peaceful relations in our countries and the whole region. Let’s work together, let’s build a model of peace that will set an example for the whole region.”