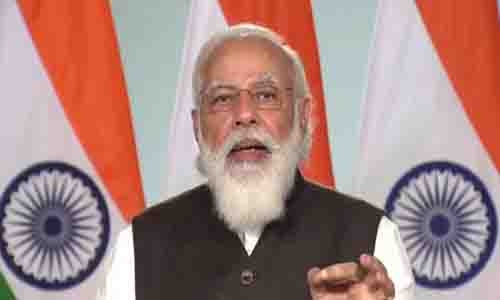 Prime Minister Narendra Modi yesterday asserted that the country is looking to exceed its Paris Agreement targets, stating that climate adaptation is a key element of India’s developmental efforts.

“We have promised ourselves that we will not just arrest environmental degradation but reverse it.

We will not just create new capacities but make them an agent for global good,” said PM Modi addressing the Climate Adaption Summit 2021.

Modi said that India is targeting 450 gigawatts of renewable energy capacity by 2030.

Listing out the actions planned by the country to meet the goals of sustainable development, the PM said that India is planning to restore 26 million hectares of degraded land by 2030.

“We are providing clean cooking fuel to 80 million rural households.

He stated that India’s efforts are not restricted to the country.

“The International Solar Alliance and the Coalition for Disaster Resilient Infrastructure show the power of global climate partnership.

I call upon the Global Commission on Adaptation to work with CDRI to enhance infrastructure resilience globally,” said the PM.

Solar bank plan in India The steering committee of the International Solar Alliance (ISA) is set to meet shortly to clear the decks for the World Solar Bank (WSB), which is expected to be headquartered in India.

The country may become its lead member by taking a 30% stake in it through a $600 million equity commitment.

This would be the first multilateral development bank (MDB) headquartered in India and comes even as Beijing has taken the lead in creating the Asian Infrastructure Investment Bank and the New Development Bank (NDB).