Pets are back: Biden's 2 dogs settle in at White House | THE DAILY TRIBUNE | KINGDOM OF BAHRAIN 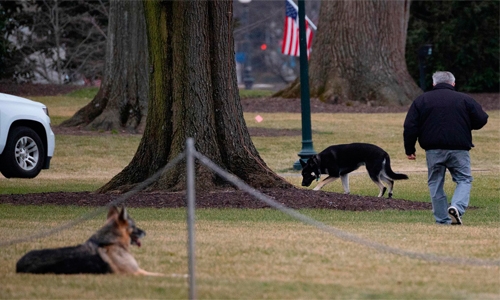 The patter of paws is being heard in the White House again following the arrival of President Joe Biden’s dogs Champ and Major. The two German shepherds are the first pets to live at the executive mansion since the Obama administration.

Major burst onto the national scene late last year after Biden, then president-elect, broke his right foot while playing with the dog at their home in Wilmington, Delaware.

The Bidens adopted Major in 2018 from the Delaware Humane Association. Champ joined the family after the 2008 presidential election that made Joe Biden vice-president.

“The first family wanted to get settled before bringing the dogs down to Washington from Delaware,” said Michael LaRosa, spokesperson for first lady Jill Biden. “Champ is enjoying his new dog bed by the fireplace and Major loved running around on the South Lawn.”

The dogs were heard barking outside near the Oval Office on Monday as Biden signed an executive order lifting the previous administration’s ban on transgender people serving in the military.

celebrate Major’s journey from shelter pup to first dog. More than $200,000 was raised.

Major is the first shelter dog to ever live in the White House and “barking proof that every dog can live the American dream,” the association said.

The Bidens had promised to bring the dogs with them to the White House. They plan to add a cat, though no update on the feline’s arrival was shared on Monday.

White House press secretary Jen Psaki predicted, while on video answering questions from members of the public, that the cat will “dominate the Internet” when it arrives.

Biden’s predecessor, Donald Trump, a self-described germaphobe, does not own any pets and had none with him at the White House.

Just like they do for ordinary people, pets owned by the most powerful people in the world provide their owners with comfort, entertainment, occasional drama and generally good PR.

“Pets have played an important role in the White House throughout the decades, not only by providing companionship to the presidents and their families, but also by humanising and softening their political images,” said Jennifer Pickens, author of a book about pets at the White House.

President Theodore Roosevelt had Skip, who is described by the White House Historical Association as a “short-legged Black and Tan mongrel terrier brought home from a Colorado bear hunt.” Warren G. Harding had Laddie Boy, who sat in on meetings and had his own Cabinet chair. President Franklin Delano Roosevelt had his beloved terrier Fala. At night, Fala slept in a special chair at the foot of the president’s bed.

When he declared victory in the 2008 presidential race, Barack Obama told his daughters: “You have earned the new puppy that’s coming with us to the White House.” Several months later, Bo joined the family, a gift from Sen. Ted Kennedy. A few years later, fellow Portuguese water dog Sunny arrived.

Among the stranger White House pets was Calvin Coolidge and first lady Grace Coolidge’s raccoon Rebecca. She was given to the Coolidge family by a supporter who suggested the raccoon be served for Thanksgiving dinner, according to the White House Historical Association. But instead she got an embroidered collar with the title “White House Raccoon” and entertained children at the White House Easter Egg Roll.

President Harry Truman famously said that “If you want a friend in Washington, get a dog” — and many successors have followed Truman’s advice. The first President Bush once said, “There is nothing like the unconditional love of a dog to help you get through the rough spots.”