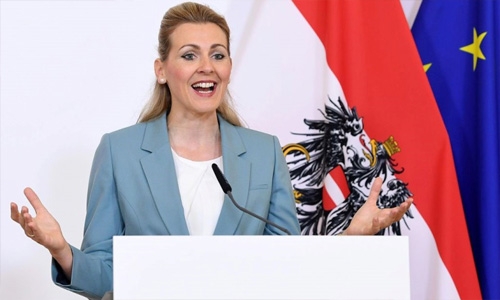 Austrian Labour and Family Minister Christine Aschbacher announced her resignation on Saturday, amid plagiarism allegations regarding her college and doctorate theses.

"I have always written my papers to the best of my ability and judgement to reach academic titles, and I trusted the evaluation of renowned professors," the 37-year-old conservative politician wrote in a statement, Deutsche press agency (DPA) reported.

She said she was stepping down to protect her family from "hostility, political agitation and insults."

Weber charged that portions of her master's thesis at a business college in Wiener Neustadt were lifted from sources that were not properly cited, including in the conclusion that is supposed, to sum up the writer's own work.

Weber also used a plagiarism detection program to analyze Aschbacher's doctorate study on "Management in Innovative Enterprises" that she had submitted last year at the Technical University in Bratislava. More than a fifth of the text was plagiarized, Weber said.

Besides, some parts of the two theses are written in garbled German.

Chancellor Sebastian Kurz said on Twitter that he respected Aschbacher's decision and thanked her for helping to save hundreds of thousands of jobs during the current pandemic.

The number of job seekers in December stood above 500,000, amounting to a jobless rate of 11 per cent. Some 417,000 people currently work shorter hours under the government's furlough scheme.

Kurz said a new labour minister would be presented on Monday.

Opposition politicians welcomed the resignation of Aschbacher, who had worked as a consultant and government aide before becoming minister last January.