US envoy to UN to visit Taiwan; China says playing with fire | THE DAILY TRIBUNE | KINGDOM OF BAHRAIN 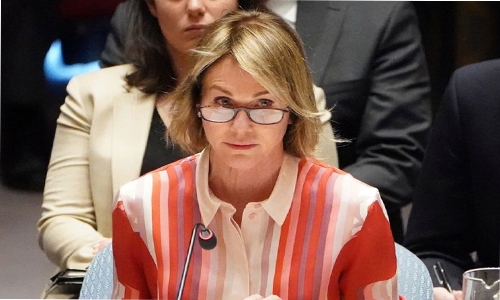 US envoy to UN to visit Taiwan; China says playing with fire

The US ambassador to the United Nations, Kelly Craft, will visit Taiwan in January. 13-15 for meetings with senior Taiwanese officials, the US mission to the U.N. said on Thursday, prompting China to warn they were playing with fire.

Beijing, which claims the self-governed island as its own territory, has been angered by stepped-up support for Taiwan from the outgoing Trump administration, including trips to Taipei by top US officials, further straining Sino-US ties.

Chinese fighter jets approached the island in August and September during the last two visits - by US Secretary of Health and Human Services Alex Azar and the US Under Secretary of State for Economic Growth, Energy, and the Environment Keith Krach, respectively.

“During her trip, the Ambassador will reinforce the US government’s strong and ongoing support for Taiwan’s international space in accord with the US one-China policy that is guided by the Taiwan Relations Act, the three US-PRC joint communique, and the Six Assurances to Taiwan,” the U.S. mission to the United Nations said in a statement.

While the United States, like most countries, has no formal diplomatic ties with Taiwan, it is the island’s strongest international backer and arms supplier, being obliged to help provide Taiwan with the means to defend itself under the 1979 Taiwan Relations Act.

China said it was firmly opposed to the visit.

“We wish to remind the United States that whoever plays with fire will burn himself. The United States will pay a heavy price for its wrong action,” China’s UN mission said.

“China strongly urges the United States to stop its crazy provocation, stop creating new difficulties for China-US relations and the two countries’ cooperation in the United Nations, and stop going further on the wrong path.”

The visit is highly symbolic as Taiwan is not a UN member, because of objections by China, which views the island as one of its provinces and not a country, and that only Beijing has a right to speak for Taiwan on the international stage.