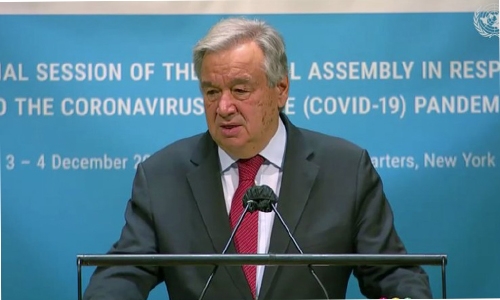 The UN chief warned that the social and economic impact of COVID-19 “is enormous and growing” and said it’s foolish to believe a vaccine can undo damage from the global pandemic that will last for years or even decades, said AP.

Speaking to world leaders at the General Assembly’s first and mainly virtual special session on COVID-19, Secretary-General Antonio Guterres accused some countries he didn’t name of ignoring or rejecting the World Health Organization’s recommendations at the start of the crisis early this year, resulting in nations going in their own directions and the virus spreading “in every direction.”

“Nearly a year into the pandemic, we face a human tragedy, and a public health, humanitarian and development emergency,” Guterres said.

The UN chief pointed to rising poverty, the looming threat of famine, and the prospect of “the biggest global recession in eight decades,” saying these impacts aren’t due to the coronavirus alone but are the result of long-term inequalities and injustices exposed by the pandemic that must be addressed.

General Assembly President Volkan Bozkir opened the two-day session, calling it a historic and overdue moment of reckoning to forge a path to end the pandemic that not only ensures people everywhere have access to vaccines but mobilizes financial resources for “an inclusive and resilient recovery.”

Nearly 80 world leaders, over 50 government ministers and 10 deputy leaders and ministers were scheduled to speak during the special session that began with Bozkir asking masked diplomats from the UN’s 193 member nations in the assembly hall to stand in silent tribute to the 1.5 million people who have lost their lives to COVID-19.

Bozkir called the session “a test for multilateralism” and said what the world must do is clear -- ensure fair and equitable access to vaccines, work together “to protect the most vulnerable countries,” provide adequate resources for an economic recovery that goes beyond pre-pandemic levels, and adopt policies that don’t harm human rights or undermine democratic institutions.

Guterres has been urging the Group of 20 — the world’s richest nations — to back WHO’s cash-strapped ACT-Accelerator program to develop and distribute vaccines that includes Covax, an ambitious global project to buy and deliver virus vaccines for the world’s poorest people.

The secretary-general, clearly frustrated at the lack of a significant response, told world leaders there is a $28 billion financing gap, “including $4.3 billion urgently needed for the next two months.”