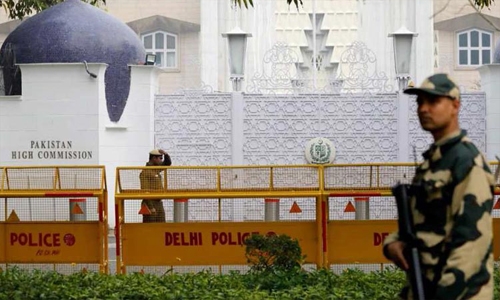 India on Saturday summoned a senior Pakistani diplomat over what New Delhi said was a foiled attack this week in the frontier territory of Jammu and Kashmir by a Pakistan-based militant group, a charge the neighbouring country denied.

Prime Minister Narendra Modi said on Friday that the killing of four Jaish-e-Mohammed militants in a gun battle with security forces, and the recovery of a large cache of weapons and explosives from them, indicated that they were planning to “wreak major havoc and destruction” in the region ahead of local elections there.

“India reiterated its longstanding demand that Pakistan fulfil its international obligations and bilateral commitments to not allow any territory under its control to be used for terrorism against India in any manner,” the ministry said in a statement.

“We view these as part of India’s desperate attempts to divert international attention from its state-terrorism in (Indian-ruled Kashmir) and state-sponsorship of terrorism against Pakistan,” the ministry said late on Friday following Modi’s comments on Twitter.

Tension between the nuclear-armed rivals has sharpened since last August, when Modi’s government ended the autonomy of its only Muslim-majority region. Kashmir is also claimed by Pakistan.

Earlier this month, Pakistan said it had compiled a dossier with evidence that militancy inside its borders was being sponsored by India to target Chinese investments, and that these operations were being run out of neighbouring Afghanistan.

India termed the accusations as “figments of imagination”.

India will hold district-level elections this month in Jammu and Kashmir, the first such exercise there since the federal government took away the area’s statehood more than a year ago.