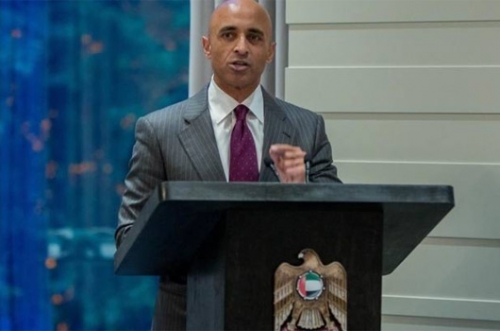 UAE Ambassador to the United States Yousef Al Otaiba has said the four-year-old dispute between Qatar and GCC countries may not be resolved 'anytime soon'.

Otaiba was speaking during a panel discussion at the Economic Club in Washington on Monday.

In June 2017, Saudi Arabia, the UAE, Egypt and Bahrain, announced a boycott of Qatar for its support of terrorism.

"I think that we have a very philosophical disagreement about what we want our region to look like, and we did not really sit down to find the solution. They follow their path and we are, and no one cares for that."

On Yemen, he said the country faces many challenges. The UAE withdrew its forces from the war-torn country last year. "Yemen faces a great deal of challenges not only economic, but in health and humanitarian care, and I think that the challenge with Yemen will be largely' internal'."

What prevents the end of the war in Yemen is the inability of the Yemeni factions to reach a solution or political reconciliation, he said

"You have the Hadi government, the Houthis, and the Southern Transitional Council. You have a variety of players who cannot reach an agreement on what the political formula should be, so I think that is the main challenge. We have worked with the UN envoy for several years. If you ask him about the biggest challenge he faces today, it is to bring the Yemenis together at the table", he added.