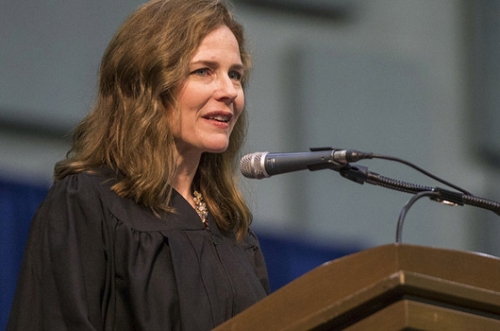 The US Senate has confirmed Judge Amy Coney Barrett to the Supreme Court in a victory for President Donald Trump a week before the general election.

The 48-year-old took the oath of office at the White House alongside President Trump.

Her appointment seals for the foreseeable future a 6-3 conservative majority on the top US judicial body.

Only one Republican, Senator Susan Collins, who faces a tough re-election battle in Maine, voted against the president's nominee in Monday evening's vote.

The new justice is the third appointed by the Republican president, after Neil Gorsuch in 2017 and Brett Kavanaugh in 2018.

What happened at the White House?

Mr Trump said: "This is a momentous day for America, for the United States constitution and for the fair and impartial rule of law."

He added: "She is one of our nation's most brilliant legal scholars and she will make an outstanding justice on the highest court in our land."

Supreme Court Justice Clarence Thomas, a conservative, administered the oath of office to his new colleague.

Justice Barrett said afterward: "A judge declares independence not only from the Congress and the president but also from the private beliefs that might otherwise move her.

"The judicial oath captures the essence of judicial duty: the rule of law must always control."

The ceremony took place on the south lawn of the executive mansion, a month after a similar event to unveil Justice Barrett as the president's nominee was linked to a Covid-19 outbreak that was followed by the president himself testing positive for the disease.