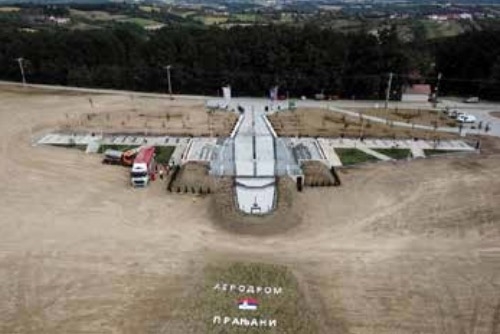 A monument shaped like a military transport plane was unveiled on a Serbian hillside yesterday, commemorating the rescue of hundreds of allied pilots who were shot down by German forces during World War Two. About 500 airmen, most Americans were brought to the village of Pranjani during 1944 to be airlifted back to base in Bari, Italy, in the bold mission behind enemy lines - known as Operation Halyard. U.S. diplomats and senior Serbian officials raised their countries’ flags at the site in central Serbia during yesterday’s inauguration ceremony.

For more than 50 years, during Communism, the operation was not officially acknowledged or taught in schools because it received local support from royalist troops led by convicted Nazi collaborator Draza Mihajlovic. Radoljub Jankovic, a local resident who was 14 at the time of the airlifts, recounted his memories of the operation in a speech at the ceremony. “I still hear the noise of the engines of the American planes in the air,” he said, presenting a bottle of home-made traditional plum brandy to the U.S. ambassador to Serbia and Serbian President Aleksandar Vucic.