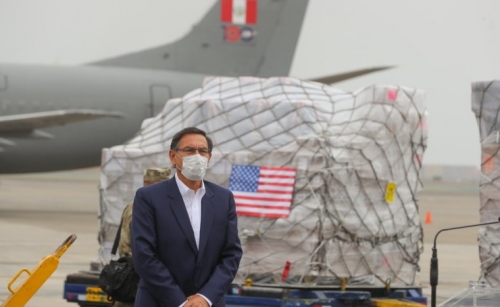 Peru's President Martin Vizcarra on Sunday said he will call a referendum on parliamentary immunity to be held together with upcoming presidential and parliamentary elections. In a televised speech, Vizcarra said the popular vote was necessary after the measure did not get the support needed in Congress despite being a campaign promise of "almost all candidates" in the most recent election, according to Deutsche press agency (dpa).

"Once again, disagreements, interests and political calculations prevailed," the president said. "For this reason... I announce that I will submit the reform on the elimination of parliamentary immunity to a referendum, so that the Peruvian people decide freely and democratically at the polls whether this measure should be implemented or eliminated."

Peruvians went to the polls in January to elect a Congress that will only serve for slightly over a year in the wake of a power struggle between Vizcarra and the previous parliament over his anti-corruption reforms. Vizcarra has been so far unsuccessful in getting Congress to pass measures aimed at reforming parliamentary immunity and preventing convicted people from running for office, among other things.

Presidential and parliamentary elections are scheduled for April 2021. Vizcarra, who was former president Pedro Pablo Kuczynski's deputy and rose to power in 2018 after Kuczynski's resignation ahead of an impeachment vote, has promised to respect the constitutional rule that bans presidents from seeking immediate re-election.