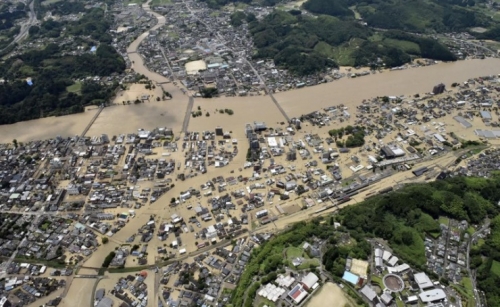 Heavy rain in southern Japan triggered flooding and mudslides on Saturday, leaving at least two dead, more than a dozen missing and others stranded on rooftops waiting to be rescued, officials said.More than 75,000 residents in the southern prefectures of Kumamoto and Kagoshima were asked to evacuate following pounding rains overnight. The evacuation is not mandatory and it was not known how many actually fled.

According to the Associated Press (AP), NHK television footage showed large areas of Hitoyoshi town in Kumamoto inundated in muddy waters that gushed out from the Kuma River. Many cars were submerged up to their windows. Mudslides smashed into houses and floodwaters carried trunks from uprooted trees. Several people were standing atop a convenience store as they waited for rescuers.

In the Tsunagimachi district, two of three people buried underneath mudslides were pulled out without vital signs, Kumamoto prefectural crisis management official Takafumi Kobori said. Rescuers were still searching for the third person. NHK said about 13 people were reported missing. Kumamoto officials say they were still assessing the extent of damage.