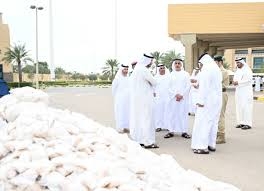 The Dubai Police recently foiled the biggest drug smuggling attempt in the country, seizing 5,656kg of Captagon tablets valued at Dh35.8 million. The narcotics were found stashed in reels of electric cables.

Maj-Gen Abdullah Khalifa Al Marri, Commander-in-Chief of the Dubai Police, said four smugglers - all Arabs - have been arrested, including the head of the gang.
They were believed to be part of "an international gang highly experienced in smuggling drugs".

The gang's head is even considered one of the biggest drug smugglers reported in a Eurasian country, Maj-Gen Al Marri said.

"Investigations showed that they were planning to re-export the drugs to another Arab country," he added.