Another earthquake hits Puerto Rico with 6.0 magnitude | THE DAILY TRIBUNE | KINGDOM OF BAHRAIN 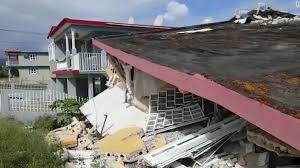 An earthquake with a preliminary magnitude of 6.0 rattled Puerto Rico on Saturday morning, the US Geological Survey reports.

The quake was about 8 miles south of Indios, Puerto Rico, in the Caribbean Sea, the USGS said, at a depth of 6.2 miles.
Puerto Rico has been rattled by temblors throughout the week, including a 6.4 magnitude quake Tuesday that killed at least one man, destroyed homes and left most of the island without power. A 5.2 magnitude aftershock struck on Friday afternoon.
The US territory was expecting power to return by Saturday to its 3 million residents, and authorities had tweeted that it was 95% restored a couple of hours before Saturday's quake.
Parts of Lares, Adjuntas, Ponce and San German lost electrical service after Saturday's quake, the power company Electric Energy Authority said.
After the tremor, power was on to about 93% of the island, the Puerto Rico Electric Power Authority said.
Since December 28, about 500 earthquakes of magnitude 2.0 or higher have hit Puerto Rico, the USGS said.
The territory is still recovering from Hurricane Maria in 2017.

Liverpool march toward history as top-four race heats up