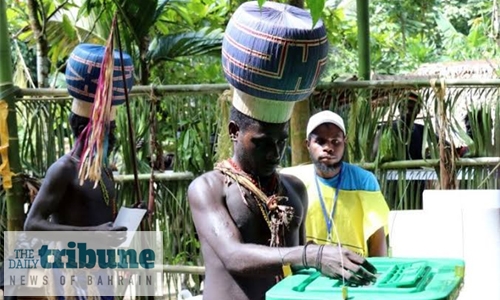 Bougainville voters back independence by landslide

Voters backing Bougainville’s independence from Papua New Guinea have won a landslide referendum victory, according to results released yesterday -- a major step toward the troubled isles becoming the world’s newest nation. Chairman of the Bougainville Referendum Commission Bertie Ahern declared 176,928 people -- around 98 percent of voters -- had backed independence with just 3,043 supporting the option of remaining part of Papua New Guinea with more autonomy.

The announcement prompted loud cheers, applause and tears as dignitaries soon burst into song, with strains of the islands’ anthem “My Bougainville” ringing out. “Happy is an understatement” nursing graduate Alexia Baria told AFP, “you see my tears, this is the moment we have been waiting for.”

The historic vote caps a decades-long peace process and a long recovery from a brutal civil war between Bougainville rebels, Papua New Guinea security forces and foreign mercenaries that ended in 1998 and left up to 20,000 people dead -- 10 percent of the population. “Now, at least psychologically, we feel liberated,” said John Momis, the priest-turnedleader of the autonomous region’s government.

But independence will not be immediate, a long political process lies ahead and leaders face formidable financial and administrative challenges to turn a cluster of poor Pacific islands into a fully-fledged nation. The result must first be ratified by Papua New Guinea’s parliament -- where there is opposition to the move for fear it may spark other independence movements in a nation defined by disparate linguistic and tribal groups.

But the scale of the victory for the pro-independence side will heap pressure on Port Moresby to endorse the outcome.